U.S. Oil Imports Declining Since 2005 Peak. It’s Not All Good 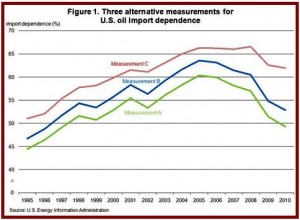 United States oil imports have declined since peaking in 2005, continuing a slowly emerging trend, according to the U.S. Energy Information Agency. Looked at one way – and there are several ways of doing so – imported oil fell below 50% level for the first time since 1997 during 2010. U.S. dependence on foreign petroleum is expected to continue to decline during the next two decades anyway it’s measured.

There are several problems with the imported oil numbers since oil is mostly imported as crude, an unrefined product, but is consumed as a refined product. In between there is refinery gain – yes, gain – whereby more comes out of the process of splitting heavier oils into lighter ones.

There’s also the blending of ethanol into gasoline or the use of other biofuels, thereby decreasing the imported oil component of the measurement. And the processing of natural gas creates liquid fuel, to cite just one of other complications.

There is no simple explanation for the decline in U.S. oil import dependence since 2005. Some it is good news – more efficient vehicles, buildings and industrial processes. And some of it is decidedly bad news – the economy is languishing. Energy use is an admittedly, well, crude way of measuring wealth production, but it’s fundamentally true that more energy consumption equals more wealth. And U.S. wealth creation is anemic at best these days.