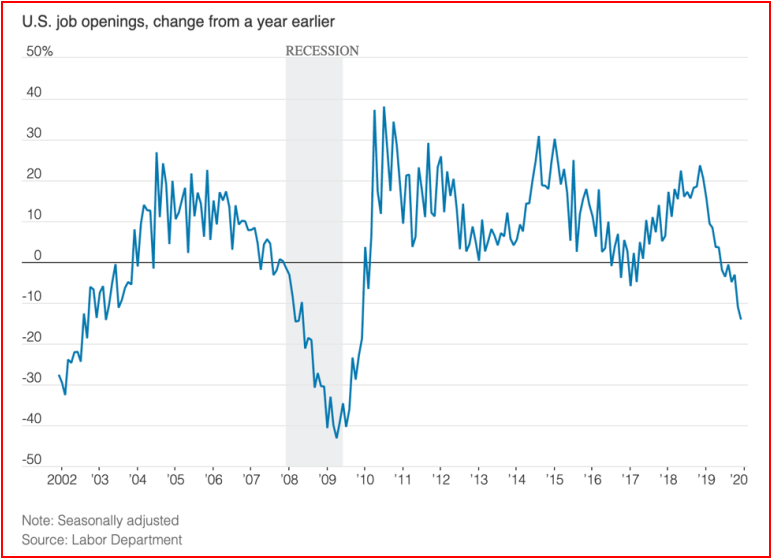 We are back to declining levels of job openings like during the Great Recession. China looms large as U.S. assembly plants start to shut down from lack of parts.

During 2019 in the U.S. SUVs faced their slowest year since the end of the Great Recession, rising 2.5% Year-over-Year. However, SUVs took more than 50% of sales in August, November and December, to end the year with a 48.8% share, according to consultancy LMC. LMC forecasts the total market 2020 market will fall to 16.8 mn Light Vehicles this year (-1.2% YoY), but hedges with the size of the unknown negative effects of the China’s corona virus epidemic. (AutoInformed: Global Light Vehicle Sales Slump. The Party’s Over?)

Compact SUVs during 2019 were the largest segment in the US and declined with the slowing market with a 19.2% share. For 2020, LMC forecasts 20%, thanks to the first full year of sales of the new Ford Escape as well as the ongoing popularity of the Toyota RAV4 and Honda CR-V.

Ford’s disastrous launches of the Explorer and Escape will continue to haunt this year it in AutoInformed’s view. Ford Motor Company at the beginning of February announced that Jim Farley has been named chief operating officer of Ford, reporting to Jim Hackett, the company’s president and CEO, as Ford continues plodding toward a self-proclaimed transformation into a higher-growth, higher-margin business selling smart, connected vehicles and services. Ford said that Joe Hinrichs is “retiring” as Ford’s President, Automotive after less than one year in the position. (2020 Ford Explorer – OK, Not Good in Crash Ratings, Two New Safety Recalls at Ford Motor – F-Series and Explorer, Driving 2020 Explorer: Big Size and Complexity, Bigger Price, Ford Shakes Up Top Management. Again)

The changes come as Ford is restructuring operations, investing in new products portfolio and reducing bureaucracy. Ford lost $1.7 billion (42 cents a share) during Q4 2019 compared to a loss of $100 million, or 3 cents a share, Year-over-Year. This included a previously disclosed $2.2 billion charge for underfunded pensions. Adjusted for one-time items, Ford said it gained 12 cents a share during the year, compared with 30 cents a share a year ago. Revenue fell -5% to $39.7 billion from $41.8 billion a year ago. Global sales, share, earnings, and profits all decreased, as new product launches such as the Explorer were problematic. (Ford Posts Weak Q4 Earnings Losing $1.7 Billion, Weak Ford 2018 Financial Results Prove Need for Shakeup)

The Ford brand – and the F-150 – led U.S. sales last year, but ongoing nemesis Toyota expanded its advantage over Ford as a group, outselling Ford by 37,100 units in 2019. LMC previously forecast the gap to grow to 60,400 Light Vehicles this year thanks to the popularity of the RAV4, making it country’s bestseller, excluding pickups. The Tacoma is likely to keep its lead in the mid-size pickup segment, with newly refreshed Highlander available for all of 2020.

“Last year, Ford was hurt by the changeover of the Escape and Explorer, a bad indication of what could happen to the new F-150, expected to arrive in the second half of 2020” notes Augusto Amorim, Senior Manager, Americas Vehicle Sales Forecasts LMC.

He also notes that Ram sold more than 680,000 units last year, the highest volume since its inception. With two generations of the 1500 being sold concurrently and higher incentives, the 1500 outsold the Chevrolet Silverado for the first time.

According to J.D. Power, Ram offered $5,604/unit on average, the second highest incentive by dollar amount, and was above $6,000 in June, November and December. At the same time, not all versions of the Silverado were offered earlier in the year and the UAW strike hurt inventories even more. LMC thinks that Chevrolet Silverado will be slightly ahead of the 1500 thanks to increased availability. (General Motors Posts Huge Q4 Strike Losses and a Weak 2019)

The Renault-Nissan-Mitsubishi alliance disaster will continue in 2020. Nissan tried last year to cut incentives and lower fleet sales, but overall sales dropped -8.7%. Overall, incentives were flat in 2019, but Nissan increased its dependence on fleet sales. LMC predicts fleet represented 37.5% of sales in 2019, up from 32.9% in 2018. Infiniti also had a difficult 2019, with its performance better than only that of Alfa Romeo in the Premium market. Sales fell by 21.2%, without any introductions or model updates and the end of the QX30. LMC predicts Nissan and Infiniti will lose more ground this year, as Nissan SUVs age (Carryover 2020 Nissan Frontier Has Next Gen Engine and Trans) and Infiniti’s portfolio lacks new products.

Ken Zino is an auto industry veteran with global experience in print, broadcast and electronic media. He has auto testing, marketing, public relations and communications expertise garnered while working in Asia, Europe and the U.S.
View all posts by Kenneth Zino →
This entry was posted in news analysis, sales and tagged 2020 US Vehicle Sales, auto industry commentary, autoinformed.com, Kenneth Zino, lmc automotive. Bookmark the permalink.