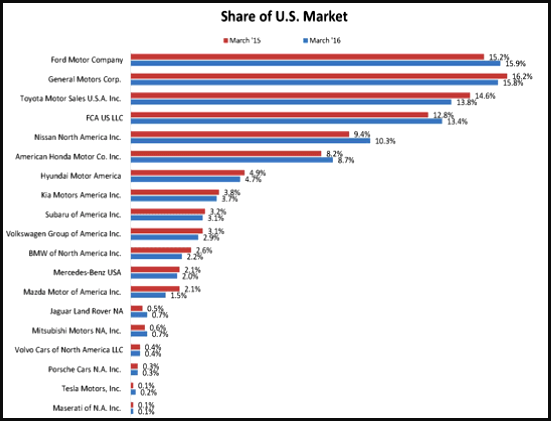 However, if you consider the high-profit GMC Sierra pickup sales at 22,000 then you get a different picture of second place since Sierra comes off of the Silverado platform so the Ford Motor versus GM pickup battle remains closer than a cursory glance reveals.

After the Top Three offshore brands swept the remaining Top Ten spots. Toyota Camry held its lead as America’s top-selling car with a fourth place finish, followed by another mid-size sedan, the Nissan Altima in fifth place. The other mid-size, Honda Accord was in eighth place. In sixth place – sales climbing 21.8 % compared to last March, the Honda Civic posted the biggest sales improvement of all the Top Ten vehicles. The Toyota Corolla followed in seventh place, while the Toyota RAV4 crossover saw sales jump +15.1% in tenth place. Not a Detroit Three car in sight.

“International brands led the industry with strong sales in the month of March,” said AIADA President Cody Lusk. “They continue to be the most popular cars on American roads, a trend which looks to be continuing in 2016.”

Well, there is a glaring exception – beleaguered Volkswagen. The German cheater brand saw sales decline -10%  in a market that grew by +3.2%. Year-to-date VW brand sales are down -13%, and dealers are suffering as VW and EPA try to reach a resolution on how to fix, recall or buy back more than 500,000 dirty diesel vehicles.

AutoData says that the seasonally adjusted annual rate (SAAR) in March was 16.57 million units, versus 17.14 million units in March 2015. Total industry deliveries increased by 3.2% as stated compared to last March and 18.7% versus February’s delivery figures. Industry-wide, 1,595,484 light vehicles were sold in March, up from 1,545,802 in March 2015. Un-adjusted for business days, sales for all brands for the year increased 3.4% for the year-to-date.

Ken Zino is an auto industry veteran with global experience in print, broadcast and electronic media. He has auto testing, marketing, public relations and communications expertise garnered while working in Asia, Europe and the U.S.
View all posts by Ken Zino →
This entry was posted in auto news, sales and tagged aiada, autodata, autoinformed, autoinformed.com, Ken Zino. Bookmark the permalink.