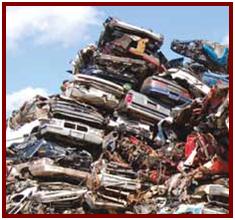 Critics maintain that lax pollution, safety and wage standards in some counties put American firms and workers at a disadvantage. Metal theft is a huge issue in many U.S. urban areas.

Insurance Auto Auctions (NYSE: KAR), a salvage firm, today announced an expanded agreement with a Chinese recycler to export and shred U.S. autos. The deal involves Chenlong Resource Recycling Development Company in Zhangjiagang, Jiangsu, China. Chenlong was one of the first companies to receive recycling permits from the communist Chinese government, which allows the importation of vehicles. An estimated 30% of IAA’s vehicles are sold and exported to foreign countries.

Chenlong is also the first company in China to complete the installation of a shredder built specifically for the processing of scrap steel that includes automobiles coming from the United States.

“This agreement helps us achieve our growth strategy by expanding our global buyer base in a region with a fast-growing need for scrap metal,” said Tom O’Brien chief executive officer at Insurance Auto Auctions.

In 2008, when IAA first met with Chenlong Recycling in China, plans were drawn for them to build a multi-million dollar recycling center in Zhangjiagang. Today, the newly completed facility is capable of processing hundreds of thousands of tons of scrap iron. Through this new agreement, IAA has the ability to be a major salvage provider to this operation–specifically, lower-end vehicles for the purpose of recycling.

“The management team at IAA has been dedicated to seeing scrap vehicles legally enter the China market and their support of our efforts has been both encouraging and instrumental in helping us shape our business model in the U.S said Gu Long Sheng, President of Jiangsu Chenlong.

Recycling metal from salvage vehicles can save energy, conserves natural resources, and enables steel production with low pollution levels. According to the Institute of Scrap Recycling Industries, recycling one car conserves 2,500 lbs. of iron ore, 1,400 lbs. of coal and 120 lbs. of limestone. Until recently, Chinese government laws prohibited the import of salvage vehicles from the United States into mainland China. In the U.S., ISRI claims the scrap recycling industry supports more than 450,000 jobs.

Insurance Auto Auctions, a 30 year old firm, claims a global customer buyer base in more than 100 countries. Its buyers include automotive body shops, rebuilders, used car dealers, automotive wholesalers, exporters, dismantlers, recyclers, brokers, and – where legal – public buyers. IAA said it follows regulatory compliance at the federal and state levels and it is well versed in all state titling laws, as well as buyer and seller licensing.