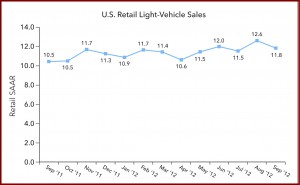 The 2012 full-year outlook for total light-vehicle sales in the United States remains at 14.3 million units.

September new-vehicle retail sales are now projected to at 952,200 units, which means a seasonally adjusted annualized rate (SAAR) of 11.8 million units as the auto industry continues its slow recovery. This forecast for September is more than 1 million units higher than September 2011. Total light-vehicle sales in September – including fleet – are expected to increase 11% from September 2011, with volume at 1,152,700 units for a SAAR of 14.5 million, still far below the 16-17 million units automakers were selling before the economic collapse during the waning days of the Bush Administration in 2008.

Most large segments are expected to show year-over-year retail sales gains in September, with the exception of the midsize sport utility and large pickup trucks. The subcompact, compact and midsize segments are expected to show retail sales growth of at least 25% percent, compared with September 2011, according to J.D. Power and Associates. Though not part of the Power observations, General Motors has been having trouble this year with overly large inventories of pickup trucks most of this year. A major revision is due in 2013.

“Retail sales in early September were 15 percent higher than they were a year ago, which is reflective of a healthy market,” said John Humphrey, senior vice president of global automotive operations at J.D. Power and Associates. “We expect retail sales to level off through the rest of the month, but still maintain a strong share of total sales.”

Humphrey said that with vehicle inventory levels under control, fleet sales in September are projected to reach 200,400 units, only a slight increase from September 2011, and will comprise 17% of total light-vehicle sales.

“Consumer willingness or need to overlook the economic uncertainty is the driving force behind the recent strength in light-vehicle sales,” said Jeff Schuster, senior vice president of forecasting at LMC Automotive. “During the next few months, car buyers will be processing further economic news, additional details on the European crisis, as well as the forthcoming presidential election, likely creating an environment with higher volatility.”