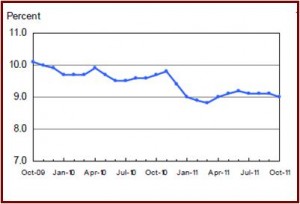 A mere 80,000 jobs were created in October as the U.S. government remains gridlocked over ways to protect let alone create jobs, ones that would pay taxes and ease the deficit.

This means that coupled with underemployed and those discouraged from looking for work, more than 25 million people are not contributing what they could and want to add to the economic prosperity of local, state and national communities.

A mere 80,000 jobs were created in October as the U.S. government remains gridlocked over ways to protect let alone create jobs, ones that would pay taxes and ease the deficit. Barely measurable growth did occur in professional and businesses services, leisure and hospitality, health care, and mining. However, government employment continued to trend down.

“The policies this administration has pursued have added jobs back into the economy, but the pace of our recovery continues to be influenced by the failure of Congress to pass legislation to put Americans back to work. However, even in the absence of action by Congress, job growth since April has averaged 90,000 jobs, compared to the 11,000 monthly average during the Bush administration,” said Secretary of Labor, Hilda L. Solis, an Obama Administration appointee.

Little to nothing is being done at the moment in Washington D.C., as the occupy movement continues to spread; and likely nothing will be done until after the presidential election where all of the potentially candidates thus far are so called multimillionaire “one-percenters” or backed by extremely wealthy special interests.

“Investing in our future and creating good jobs should be a bipartisan goal. Yet right wing partisan ideology is blocking common-sense solutions like rebuilding our roads, bridges, schools and transit and keeping teachers and first responders on the job.  The Republicans in Congress are focused on protecting millionaires at the expense of creating good jobs.  And working Americans simply aren’t buying it anymore,” said Richard Trumka, president of the AFL-CIO (Not without abundant self interest of course.)

In October, the number of long-term unemployed (those jobless for 27 weeks and over) declined by 366,000 to 5.9 million, or 42.4% of total unemployment.  The civilian labor force participation rate remained at 64.2% in October, and the employment-population ratio was little changed at 58.4%.

The number of persons employed part time for economic reasons (sometimes referred to as involuntary part-time workers) decreased by 374,000 to 8.9 million in October. These individuals were working part time because their hours had been cut back or because they were unable to find a full-time job.