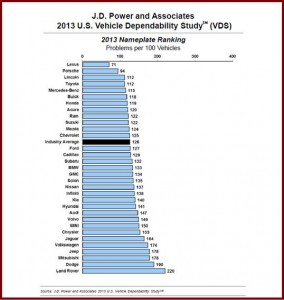 Recall battered Toyota Motor continues to perform well in long-term dependability. It earned seven segment awards, more than any other maker in 2013, for the Lexus ES 350 and RX; Scion xB and xD; Toyota Prius, Sienna and RAV4.

Overall vehicle dependability continues to improve for three-year old models to an all-time high, and for the first time dependability of all-new or substantially redesigned models is greater than carryover models from automakers. This is good news for used car buyers since well maintained off-lease vehicles will likely be durable.

This assertion also confounds the conventional wisdom that says avoid buying all new models when they first go on sale. It appears that automakers are putting substantial efforts into major redesigns to improve their quality. It also seems that greater improvement in fundamental vehicle dependability each year is offsetting any initial quality problems that all-new or redesigned models may have. As with all statistical anomalies, one survey does not a trend make; this assertion bears further review going forward, and remember averages can cover up some flagrantly bad new models from automakers.

The J.D. Power study, now in its 24th year, measures problems experienced during the past 12 months by original owners of three-year-old vehicles, in this case those that were introduced for the 2010 model year. Overall dependability is determined by the number of problems experienced per 100 vehicles (PP100), with a lower score reflecting higher quality.

In 2013, the dependability of vehicles that were new or substantially redesigned for the 2010 model year averages 116 PP100, compared with 133 PP100 for carryover models that were unchanged from the 2009 model-year. Models that were refreshed in 2010 or those with minor changes to the interior or exterior average 111 PP100 in the 2013 VDS.

Other Power data show that 54% of vehicle owners who do not experience any problems stay with the same brand when they purchase their next new vehicle. Brand loyalty slips to just 41% percent, on average, when owners experience three or more problems with their vehicle.

Lexus ranked highest in vehicle dependability among all nameplates for a second consecutive year. Among models, the Lexus RX has the fewest reported problems in the industry at just 57 PP100. This is the first time in the history of the VDS that a crossover or SUV has achieved this distinction. Rounding out the five highest-ranked nameplates are Porsche, Lincoln, Toyota and Mercedes-Benz. Chrysler Group’s Ram brand had the greatest year-over-year improvement from 2012 by 52 PP100.

Recall battered Toyota Motor Corporation continues to perform well in long-term dependability and earned seven segment awards, more than any other automaker in 2013,for the Lexus ES 350 and RX; Scion xB and  xD; Toyota Prius, Sienna; and RAV4.

General Motors received four segment awards for the Buick Lucerne, Chevrolet Camaro and Tahoe, and GMC Sierra HD. GM placed 11 models in the top three of their segments. Improvements in vehicle dependability have been made by both domestic and import brands, and the gap between the two is narrowing, though offshore brands still clearly lead. American Honda received two model-level awards for the Acura RDX and Honda Crosstour. The Audi A6, the extinct Ford Ranger, Hyundai Sonata, Mazda MX-5 Miata, and Nissan Z also received segment awards.

The 2013 Vehicle Dependability Study is based on responses from more than 37,000 original owners of 2010 model-year vehicles after three years of ownership. The study was fielded between October and December 2012.