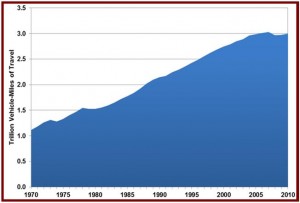 The better the economy and the lower the price of fuel, the more miles traveled.

Preliminary estimates from the Federal Highway Administration show that vehicle miles traveled (VMT) increased slightly in 2010 over the previous year.

However VMT has not surpassed the peak of 3.03 trillion miles in 2007 when the economy was booming and gasoline was relatively inexpensive.

Total U.S. VMT declined during the economic downturns in the mid-1970’s, early 1980’s, and in 2008, of course, when the U.S. economy entered its largest economic crisis since the Great Depression.

Despite all the political blather about “energy independence going back to the Nixon administration, , the U.S. still remains hostage to imported oil and corrupt  governments.