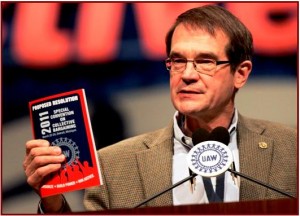 The UAW is desperate to create jobs, and reduced wages for new hires makes U.S. plants competitive with offshore facilities. Ironically, the weakest and smallest of the Detroit Three, Fiat controlled Chrysler, might be in the best position to create jobs.

The UAW announced over the weekend it reached a tentative four-year agreement with General Motors, subject to the expected, but by no means assured, ratification by its more than 48,000 GM members this week and next.

“In these uncertain economic times for American workers and faced with the globalization of the economy, the UAW approached these negotiations with new strategies and fought for and achieved some of our major goals for our members, including significant investments and products for our plants,” said UAW President Bob King.

The contract to watch closely is the now expired and unsettled one at Ford Motor where the UAW can strike, since Ford did not except bailout funds and hence is without the requisite Federal no strike provision. That said Ford did accept billions in other taxpayer subsidies and handouts during the beginning years of the Obama Administration. Insiders say Ford will not accept higher costs than those at GM and Chrysler. Two years ago UAW Ford members by a large margin rejected cost-cutting concessions to match those granted at GM.

No specific GM details were announced, as is customary by union practices. What wasn’t customary for this contract was the UAW was forbidden to strike as one of the conditions imposed by the U.S. Treasury Department for its lavish taxpayer-funded bailout of GM back in 2009. The same conditions also apply at taxpayer-saved and now Fiat-owned Chrysler, where negotiations continue this morning.

The terms of the GM agreement according to informed speculation includes a gradual increase in the base pay of new hires from about $14 an hour to $17, signing bonuses and changes in profit sharing.

However, the equalization of wages with older members of the UAW was not part of the deal. This contentious two-tier wage issue is subject to much debate inside the UAW, and it could derail the contract. Automakers, obviously want to keep wages as low as possible and all of the Detroit Three have moved hundreds of thousands of jobs offshore.

Accordingly, GM also is thought to have promised to add thousands of jobs and reopen the Saturn plant in Spring Hill, Tenn.

Regarding both pensions and health care, the UAW said in a statement at it “was able to convince GM that far greater success could be achieved working together than by cutting pensions or health care.”

Here are the details:

For all Ford, GM, and Chrysler Members: