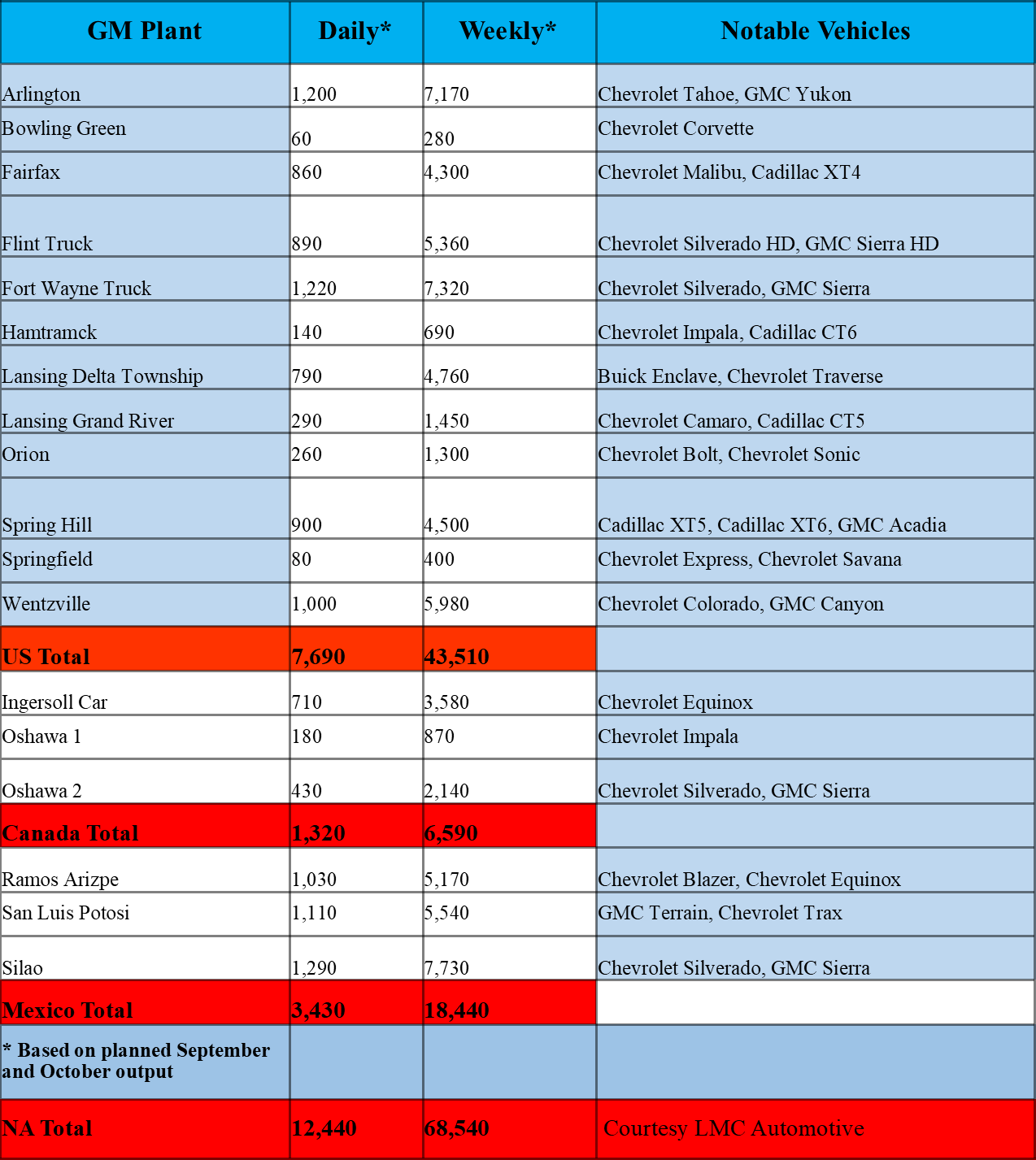 The two sides claim to be at odds over wages, benefits, investments, job security and temporary workers, but the real sticking points that mean no deal are not publicly known. How far apart the sides really are will determine the length and cost of the strike. The strike shuts down more than 30 manufacturing plants in the US, including 12 vehicle assembly plants and eight engine and transmission plants. Worse, the Teamsters won’t deliver vehicles in inventory to dealers. (The GM Grinch that Stole Christmas, or Did It?)

Consultancy LMC Automotive estimates that a strike affecting only US assembly plants would cost GM 7,700 units of lost production per day, while this would approach more than 43,500 units if it were to last a week.

Since powertrain and parts plants in the US are also affected by the strike, there is potential that vehicle production in Canada and Mexico could also be impacted especially if the CAW walks out. LMC estimates that a strike affecting all vehicle assembly plants in the region could cost GM up to 12,400 units a day and 68,500 units per week.

General Motors currently has the largest inventory of any automotive manufacturer in the US, with nearly 30% higher volumes than the next OEM, Ford. As of September 1st, GM was holding ~800,000 units of inventory, with more than 90% of the current inventory being produced in North America. That translates into a 77-day supply, which is significantly higher than the industry average of 61 days.

The majority of GM’s inventory consists of 515k units of Chevrolet vehicles and 165k units of GMC vehicles. SUVs and Pickups make up an even split of the vehicles currently on hand, with each body type accounting for 40% of inventory.

“GM has clearly attempted to stock the high volume/high profit models, as the Chevrolet Silverado Pickup has the highest inventory at 200k units (93-day supply), followed by the GMC Sierra Pickup at 78k units (84-day supply). The Chevrolet Equinox SUV rounds out the top three, with 68k units of inventory (63-day supply),” notes LMC, but the Teamsters have deflated the tires of that strategy.

LMC notes that the probability of an extended strike lasting longer than a week is increasing as the two parties remain far apart on several key issues. GM believed that their initial offer included a number of concessions that the UAW was seeking. However, their proposal was rejected, and a quick resolution does not appear likely at this time.

Previously, the 1998 UAW strike on GM lasted 54 days and cost the automaker $2 billion, which would equate to $3.1 billion in today’s dollars – or over a third of their 2018 net profit. A strike lasting this long has the potential to cost GM 500,000 units in lost production, which would quickly deplete their available inventory. In this situation, GM intenders would ultimately either delay purchases or move to competitor brands, which could result in 100,000 lost US sales in the remainder of this year.

This would make a wreck of the build-outs and start-ups of models, including the Chevrolet Corvette, Cadillac CT5 and Cadillac CT4. Model year changeovers could be delayed, as GM would need to continue to use the inventory of parts for outgoing models.

In Canada as of this afternoon, approximately half of the production at the Oshawa Assembly Plant has been impacted by the UAW strike. Operations at CAMI and St. Catharines remain unimpacted at this time said GM. “We continue to monitor the situation.”