UAW to Demonstrate During Romney Speech at Ford Field 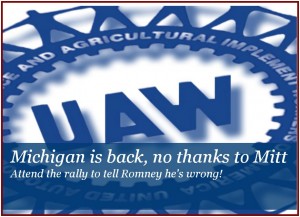 While Republican presidential candidate and multimillionaire Mitt Romney is campaigning in front of the Detroit Economic Club at Ford Field this Friday, the UAW will be holding a rally to raise hell about Romney’s “Let Detroit Go Bankrupt” comments and his continued opposition to supporting the American auto industry.

The union position was simply put in a message to its members today: “Please join us for the rally and tell Romney loud and clear not to bet against Michigan.”

“He’s trying to rewrite history and attack President Obama and the UAW for successfully saving the auto industry,” said UAW President Bob King last week as Republican presidential hopefuls began swarming in Michigan ahead of its primary next Tuesday. “He is misleading voters about the president’s bold and decisive rescue of the auto industry and about sacrifices made by workers. But voters deserve the truth,” said King.

GM’s latest financial results added fuel to a raging fire as the elite political ruling class continues a contentious debate about the proper roll of government in the flagging U.S. economy in general, with the $80 billion auto bailout as one of the focal points. One wag suggested that Democrats should run on “Bin Laden is Dead, GM is Alive,” a tough argument for Republicans and their ‘do nothing’ Congress to refute in the view of critics and what appears to be many pragmatic voters.

Taxpayers still own 32% (~27% fully diluted) of GM after the U.S. Treasury sold 28% of its holding in November of 2010. Therefore, the government still has a substantial position in what remains the country’s largest and the world’s largest automaker measured by sales.

The other bailout automaker, Fiat-owned Chrysler, also posted a profit in 2011 – $183 million. Ford Motor Company, which did not receive a taxpayer bailout but was given $5.9 billion in taxpayer subsidies from the Department of Energy to retool plants, made $8.8 billion for the year.

The record shows that prior to the bailout, UAW members made sacrifices beginning in 2005 to help auto companies by giving up pay increases, overtime pay, holidays, agreeing to a reduced pay and benefit structure for new hires, among other concessions.

President Obama demanded additional concessions and ‘shared sacrifice” from both labor and management in exchange for the loans, and it could be argued Obama essentially broke the union’s power by imposing a no-strike clause on the current and just negotiated four-year contracts as terms for the bailout.

“There’s not a person in Michigan who doesn’t have a sister or brother or cousin or friend who is tied to the auto industry,” said Stacie Steward, a UAW Local 1700 member and an electrician from Chrysler’s Sterling Heights Assembly Plant (SHAP) in Sterling Heights, Mich. “Every Michigan citizen should be appalled by what Mitt Romney said.”