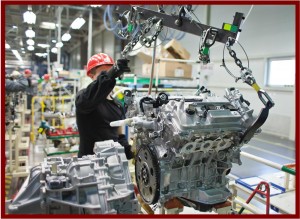 The outlook for the Russian economy was slowing before the annexation of Crimea. Now there is a chance that short-term Russia could move d into yet another serious financial crisis. This is not good news for the stockholders of Ford and GM.

The Russian auto industry was already in trouble before the Ukraine crisis made things worse. Russian new car sales were just under 2.6 million units in 2013, representing a decline of 5.5% compared to 2012.

This year started better than expected – sales were down by just 1% in February but the sudden decline of the Ruble, -10%, since January is hurting suppliers who export to Russia.

Russian car production has expanded in recent years, but the share of imported cars increased in 2013 when they accounted for almost 36% of the market. A further 46% of sales were accounted for by producers building foreign-branded cars in Russian plants and for some of these vehicles, local content is still relatively low, according to consultancy LMC.

Russian sales for the largest producer, Avtovaz, which is controlled by the Renault-Nissan Alliance, fell by 19% in the first two months of 2014, but because its cars have few imported components, the brand may be able to claw back some lost market share in the coming months, as its rivals are unable to avoid substantial price hikes.

The outlook for the Russian economy was deteriorating before the annexation of Crimea. Now there is a very real chance short-term Russia could go into yet another serious financial crisis. This is not good news for the stockholders of Ford Motor and General Motors Company, or many other auto related companies. Both Ford and GM are already posting severe losses in the EU, and both have investments in Russia that were supposed to represent the future of profits on the continent.

LMC’s previous forecast, issued under the assumption of stabilization and no further escalation of tension, saw a drop of -2 to -4% in new car sales in 2014. Since that forecast was released, the Russian authorities say they have scrapped plans to support the market via another loan interest subsidy during 2014. Similar schemes were introduced in 2009 and 2013 and were helpful in reviving the car market. Budgetary constraints may be behind the latest decision, which means LMC now expects a decline of at least -8% for Russian car sales in 2014.

Things could get much worse following the extension of sanctions by the West. Such a development would squeeze the economy by accelerating capital flight and prompting a further run on the ruble thereby triggering a severe tightening of monetary policy. Under such conditions, the car market could decline by at least -10 to 15% and possibly by as much as -20% in 2014.

Hopes that Russia might overtake Germany in 2014 have long since evaporated and the latest cut to LMC’s forecast means that the timetable for Russia to become Europe’s largest car market has already slipped to the end of the decade at best.

Ken Zino is an auto industry veteran with global experience in print, broadcast and electronic media. He has auto testing, marketing, public relations and communications expertise garnered while working in Asia, Europe and the U.S.
View all posts by Ken Zino →
This entry was posted in economy. Bookmark the permalink.