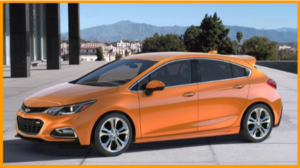 Well that’s only partially true. GM delivered more than 172,000 Cruze sedans in the U.S. from Lordstown during 2016 through November, a -18% decline year-over-year. However, it built more than 50,000 Cruze hatchbacks in Mexico. GM didn’t say how many were delivered in the U.S.

U.S. automakers have been shifting low-margin car production to Mexico or South America, and using the capacity freed to produce high profitable, pickup trucks, SUVs and crossovers. Year-to-date overall car sales in the U.S. are off -8% as light truck sales increased +7% in what could be the second record year in a row.

The crucial question – and unknown – is to what extent campaign rhetoric translates into real policy decisions under a Trump administration. In gridlocked Washington, this won’t be known for, well, who knows how long? (Trump versus Auto Industry – Outcome Could be Ugly)

GM’s political problem here is that last year it said it will lay off 2,000 employees at two U.S. auto plants, one in Lordstown. FCA and Ford Motor have the same issues. (Trump Claims Jobs Victory on Minor Tweak in Ford Production)