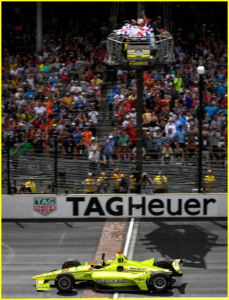 The Indianapolis 500 – aka the Memorial Day Classic – has been rescheduled for Sunday, Aug. 23 due to the COVID-19 pandemic, officials from INDYCAR and the Indianapolis Motor Speedway (IMS) announced today. The 104th edition of “The Greatest Spectacle in Racing” will air live on NBC, with the official green flag time to be announced at a later date.

The GMR Grand Prix moves to Saturday, July 4 (so far) on the IMS road course as part of an historic double-header with the INDYCAR SERIES and NASCAR. This first-of-its-kind racing event also will be televised by NBC on Independence Day.

“I am disappointed that we have had to reschedule the Indianapolis 500,” Roger Penske said. “However, the health and safety of our event participants and spectators is our top priority, and we believe that postponing the event is the responsible decision with the conditions and restrictions we are facing.”  (Pagenaud Driving a Chevrolet for Penske Wins Indy 500)

All concerts scheduled for the original Race Weekend in May have been canceled. This includes REO Speedwagon and Styx on Friday, May 22, Luke Bryan on Saturday, May 23 and Martin Garrix on Sunday, May 24.

The Indianapolis 500 was, of course, originally scheduled for Sunday, May 24, in its traditional spot on the calendar during Memorial Day weekend. The GMR Grand Prix was scheduled to be run on Saturday, May 9.

On-track driving in August will begin at IMS with practice sessions on Wednesday and Thursday, Aug. 12-13, followed by Fast Friday on Aug. 14 and Indianapolis 500 Qualifications on Saturday and Sunday Aug. 15-16. Each day of qualifying will be televised on NBC, providing more network coverage of qualifications than in 2019. A full broadcast schedule will be released “soon.”

The following week’s schedule will begin with hot pit-stop practice sessions on Thursday, Aug. 20 and include Indy Lights practice and qualifying. The Indy Lights Freedom 100 race, an expanded Indy 500 Pit Stop Challenge and final Indianapolis 500 practice will take place on Friday, Aug. 21 as part of Miller Lite Carb Day, followed by the public drivers’ meeting and full-field autograph session on Saturday, Aug. 22 as part of Legends Day presented by Firestone.