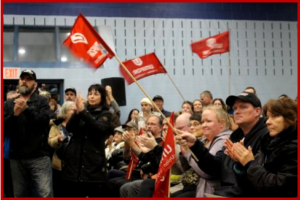 Ay, what about our contract?

“We do not accept any plans to close GM Oshawa or any restructuring plans that will result in the closure of the Oshawa operations,” said Unifor, the largest and arguably the most progressive and effective union operating in Canada.

AutoInformed notes that GM has said that Oshawa accounts for 45% of the workers affected by GM restructuring plans. Canada is GM’s fourth-largest global market—at average prices, GM’s sales in Canada are worth well over $10 billion each year.* GM Oshawa is among the most flexible auto plants in the world, specifically designed to produce many different models at the same time.

Oshawa is the only operation in North America capable of building both cars and pickup trucks in the same plant.  When Silverado and Sierra truck production resumed this year, the plant was soon operating at the highest level of quality among all GM truck plants. And GM Oshawa as one of the most advanced and best paint shops in the world.

“The company has framed these plans as being about moving toward new technology and focusing on electric and autonomous vehicles,” said Unifor.

“Although Unifor supports all auto companies in their efforts to adapt their business model with an eye to the future, there is no justification—whatsoever—for implementing plans that result in the closure of highly productive and flexible plants, like Oshawa, in order to accomplish these goals, says Unifor.”

“GM’s plans were unveiled not in a declining market, or because the company faces a dire financial position—the U.S. market for vehicles remains at peak levels, with sales expected above 17 million units again this year, and Canadian sales will yet again top 2 million this year. GM is performing very strongly, reaping $US 6 billion in profits in the first nine months of 2018 alone . These are good times in the industry, which means that GM has many options available to pursue its transformation other than closing existing plants,”  said Unifor.

GM appears to have a legal contractual problem here – one that Unifor confirms. GM in the 2016 Unifor negotiations committed in the collective agreement to keeping plants open.

“As a result of your deep concern about job security in our negotiations and the many discussions which took place over it, this will confirm that during the term of the new Master Agreement, until September 21, 2020, the Company will not, except as otherwise agreed to by the parties, close or sell any plant or ongoing business, in whole or in part, covered by this Agreement. (General Motors of Canada and Unifor 2016 Master Collective Agreement, p. 384)

Under the terms of the agreement, GM has an obligation to keep the Oshawa plant open until September 21, 2020—at a minimum—at which time Unifor will have an opportunity to sit down and discuss any restructuring plans during negotiations.”

AutoInformed notes that since its announcement this week, GM now says that the “unallocated” plants in the U.S. will not be closed but rather “idled,” subject to negotiations with the UAW next fall. Unifor says that is a first step in Canada as well.

“We expect that the company will meet its legal obligations under the collective agreement. Ultimately, efforts to enact these plans serve as a betrayal of those workers who have delivered the highest-quality work for the company for decades. Despite efforts to frame these plans as being about the future, the result would be to wind down more production in Canada and the U.S. while continuing to boost production in Mexico…

“GM Oshawa has earned the right to a strong future. At every turn, over many decades, the members of Unifor Local 222 at GM Oshawa have delivered for the company. Oshawa has been building cars for over 100 years. Whether through several rounds of restructuring and uncertainty, or by launching new products and implementing major investments, the workers at GM Oshawa have always reached the very highest levels of quality and productivity. The members of Unifor Local 222 are justifiably proud of their record.

“The plant, and the products built there, have received countless quality awards, including four gold and four silver J.D. Power awards in the organization’s annual review of automakers and production plants around the world. Oshawa also performed the best for all of GM’s Chevrolet products in Consumers Reports, with the Impala; and best within the company’s Cadillac products with the XTS.

“The plant often leads measures of workforce productivity, including, most recently, in the 2015 Harbour Report, capturing the top spot in three out of the five vehicle segments in which the plant operates,” said Unifor.

*Independent research conducted in 2015 revealed that the economic activity of the GM Oshawa operations at that time were responsible for 30,000 jobs in the wider economy and generated over $1 billion per year in public revenue.  An expanded study from 2016, which examined the economic impact of the Canadian manufacturing operations of GM, Ford, and FCA, found that they resulted in a $4.7 billion annual contribution to the public purse.