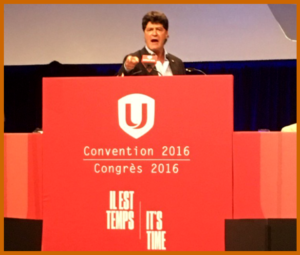 Diverse workers at Fiat Chrysler Automobiles attended local ratification meetings on Sunday and voted to agree on a four-year contract that secures both investment and wage improvements for almost 10,000 *Unifor members. All three tentative agreements with FCA were ratified with a majority vote.

In a statement that belies the rancor around the talks, FCA said it “ is pleased that Unifor members have voted to ratify a new four-year national labor agreement, covering 9,750 employees.” One week earlier when the deal was cut at the last minute with a strike authorization in place, Unifor National President Jerry Dias said, “Sergio Marchionne isn’t a charm school graduate. We debated and argued.” That’s the polite public version, of course.

The production and maintenance Agreement that applies to workers at the Brampton, Etobicoke and Windsor assembly plants was approved with an overall vote of 70.1%, broken down as 69.1% by production and skilled trades with 73.9%. The security, fire and emergency services Agreement was ratified with 91%, while the office, clerical and engineering unit approved the Agreement with an 81.7% approval. All three Agreements achieve the union’s key priorities and offers financial gain for members at all FCA plants.

“Negotiations with FCA were tough, but I am proud that our union stood united and focused to push for the pattern Agreement that our union originally achieved with GM,” said Dias. “This Agreement helps to shift the landscape in the auto industry and it provides a solid economic increase for all of our members and their families.”

Dias omitted that the agreements will have FCA seeking controversial subsidies from provincial and/or the Canadian national governments, although the contract is not contingent on such taxpayer subsidies.

“In each round of our negotiations, the union has set clear objectives, and so far, we have reached these, including our top priority to secure investment and defend good jobs in local communities,” Dias said. “With Ford, our union will accept nothing less.”

Founded as the Chrysler Corporation in 1925, FCA Canada is based in Windsor, Ontario, and celebrates its 91st anniversary in 2016. FCA Canada is a wholly-owned subsidiary of FCA US LLC, a member of the Fiat Chrysler Automobiles N.V. (FCA) family of companies. FCA Canada has approximately 440 dealers and markets Chrysler, Jeep, Dodge, Ram and Fiat brands, as well as the SRT performance vehicle designation. The company also distributes Alfa Romeo models and Mopar products. In addition to its assembly facilities, which produce the Chrysler Pacifica, Dodge Grand Caravan (Windsor), Chrysler 300, Dodge Charger and Dodge Challenger (Brampton), FCA Canada operates an aluminum casting plant in Etobicoke, a research and development center in Windsor, and has sales offices and parts distribution centers throughout the country.

*Unifor is Canada’s largest union in the private sector, representing more than 310,000 workers, including 23,050 at the Detroit Three companies. It was formed Labor Day weekend 2013 when the Canadian Auto Workers and the Communications, Energy and Paperworkers union merged.