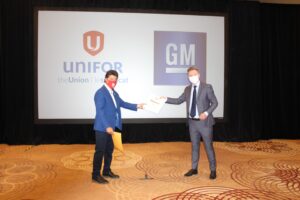 All ten of the Detroit Three Canadian plants are at risk some analysts say that potentially could be covered by a new four-year contract. The union represents ~35,000 auto workers overall, with ~20,000 employed by the Detroit Three.

Mimicking UAW collective bargaining for ~150,000 autoworkers in the US, Unifor negotiates vital parts of the contract with one automaker and that establishes the pattern for the rest. The target company will be announced in July.

Unifor beat GM in 2018.  GM announced it would close Oshawa  but Unifor negotiated to switch it to making after-market parts. This maintained its existence as an auto plant and therefore allows for more auto-related manufacturing. Ford is rumored to be set on closing its Oakville SUV plant, but has no comment at this time. Unifor represents about 6,300 Ford workers at five sites, including 4,200 at the Oakville plant. FCA is down to one plant in Brampton, Ontario that builds the Chrysler 300, Dodge Challenger, Dodge Charger.

GM and Unifor have been traveling a pothole-strewn road for the past two years. See AutoInformed on:

In a refreshing departure from the Trump Administration’s lack of plans for dealing with the pandemic, Unifor said, “Due to the COVID-19 pandemic, strict safety protocols will be in place for the duration of the negotiations to ensure compliance with Ontario health directives.” This includes the media. AutoInformed will be happy to comply with this commonsense directive.

Separately, today GM released three innovations in use at GM workplaces today, with the software code and hardware plans available to all developers:

In GM workplaces – and many other kinds of facilities today – safety protocols call for an entry process that includes a temperature evaluation, normally administered by another worker. GM developed new software code that integrates the operation of an infrared thermal camera with a computer and monitor, automating and streamlining the entire process.

Leveraging open-source code from the OpenCV project, the system automatically detects when someone has stepped in front of the camera and checks for an elevated skin temperature, indicating it is either safe to proceed or the entrant needs further evaluation. The process can take as little as 1-2 seconds, relieving bottlenecks at workplace entry points and reducing physical contact between workers. The scanning is effective when the worker is wearing a mask or face covering.

Kiosks are in use at numerous GM offices and plants across the United States and will expand to other global locations soon. While the actual kiosk GM built is for its own facilities, the innovation that makes it work can be applied in many other kinds of workplaces. The software is available to help any workplace or facility with similar entry scanning processes.

“We believe our application advances the state of the art when it comes to mobile apps for contact tracing, which is the subject of massive software development efforts across multiple industries today,” said Tony Bolton, GM chief information officer of Global Telecommunications and End-User Services.

GM is testing a mobile app that would create a record for the employee, listing other users with whom he or she has been in contact. It can help medical staff reach employees that had contact with a worker testing positive for COVID-19, while maintaining privacy and security. The app also constantly computes the physical distance between users and can send an alert to help encourage safe behavior. GM is planning a pilot to test the application soon.

The new Touchless Print mobile web application now enables employees to print documents without touching the printer’s control panel, leveraging instead a QR code scanned through the employee’s mobile phone. The process is not only safer, but very quick and extremely simple.

“Touchless printing is a first step, as the team is also working on using technology to make other daily activities more hands-free,” Bolton said.

This app is in use now at GM facilities worldwide, for iOS and Android devices, and exclusive to HP printers. The open-source software for the app was released earlier this month.