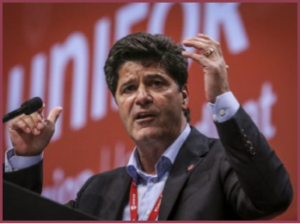 General Motors is the target company in  negotiations for a new collective bargaining agreement, Jerry Dias president of Unifor said this morning in Toronto. The union, an outgrowth of the Canadian Autoworkers and other unions, represents more the 23,000 workers at the Detroit Three automakers, and more than 310,000 members in every major sector of the Canadian economy.

“The strength of the auto industry in Canada is not only vital to those in the industry, but to the entire Canadian economy,” Dias said. “Policy makers and the public need to understand what is at stake here.”

Unifor has economic clout and political power. Unifor says it will strike if it doesn’t get an agreement when the current agreements expire. (Canadian Unifor Opens Talks with Detroit Three This Week)

Following typical UAW practices, a target company is chosen to set the pattern for bargaining with the rest of the industry, in this case Ford and Chrysler. Once an agreement with the target company is ratified by members, the focus in bargaining shifts to a second company, and then the third.

The negotiations are centered on a simple premise –  new production for Canadian plants, with products named in writing. Dias pointed out that Canadians invested C$10.8 billion dollars in GM during its bankruptcy. Mexico gave nothing.

Mexico and NAFTA, of course are issues in the current U.S. Presidential campaign where the majority of both parties disapprove of or loathe their candidates.

Unifor’s current contract with the Detroit Three expires 11:59 pm on Monday, September 19. Should a new agreement not be reached, Unifor autoworkers have voted – overwhelmingly – to give their bargaining committees authorization to call a strike if necessary to achieve key priorities.

An independent study released by Unifor last week found that losing the Detroit Three would eliminate $26 billion from the economy, cut 150,000 jobs and cost $4.7 billion per year in government revenues.

The future of a GM plant in Oshawa, Ontario is unknown past 2019 since GM moved the production of the Camaro to a plant in Lansing, Michigan after a previous contract four years ago. (Next Gen Chevy Camaro to Be Built in the Lansing, Michigan Plant) Moreover, GM closed a truck plant in Canada seven years ago. GM did not respond to a request for comment.

GM said no commitments before a contract in an unusually hard line statement before the talks began. “As we have underscored for the past two years, GM won’t make any future product decisions for Oshawa Assembly until after these negotiations.”

“What we’re are saying – emphatically – there has to be a solution or there won’t’ be a deal,” says Diaz, a straight talking, no-nonsense labor leader who appears to be cut from the same cloth as Walter Reuther of UAW fame.

“If we are going to have a dust-up, we might as well have it immediately,” Dias said.

During 2015, GM Canada increased its market share to 13.6% and sold 263,335 vehicles through Canada’s largest dealer network of 451 dealerships. Canada is GM’s 5th largest sales market by country. Canada is also the 3rd largest Cadillac market in the world and .  the 2nd largest GMC market in the world. They are extremely profitable.

Unifor was formed Labor Day weekend 2013 when the Canadian Auto Workers and the Communications, Energy and Paperworkers union merged. Dias has an aerospace background at then de Havilland Aircraft, now Bombardier Aerospace.

Ken Zino is an auto industry veteran with global experience in print, broadcast and electronic media. He has auto testing, marketing, public relations and communications expertise garnered while working in Asia, Europe and the U.S.
View all posts by Ken Zino →
This entry was posted in labor issues and tagged autoinformed, autoinformed.com, Ken Zino, nafta, unifor. Bookmark the permalink.