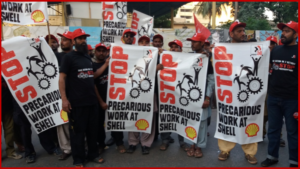 Oil and gas unions representing workers at Shell operations in five continents took a stand against precarious work during, the World Day for Decent Work in an ongoing dispute with the oil giant which is one of the biggest contributors to Global Warming. IndustriALL Global Union affiliates in Ghana, Nigeria, Iraq and Pakistan organized activities and demonstrations against precarious work at Shell, while the United Steelworkers in the USA canvassed local unions to raise awareness of precarious work as a threat at the company.

FNV union in the Netherlands circulated a pamphlet to members at Shell calling on the multinational company to apply European standards at its operations worldwide, and to practice what it preaches when it comes to workers’ rights and sustainability. The Dutch union also wrote to the CEO of Royal Dutch Shell, Ben van Beurden, and Jeanine van Barlingen, HR Manager Manufacturing at Shell in the Netherlands.

In Ghana, the IndustriALL and Chemical Workers’ Union joined forces with IndustriALL affiliates in the country to campaign against precarious work, and this year included Shell as a target. Each year the unions submit new legislation to combat poor agency issues, contract work and temporary work. They also carried out interviews for radio, TV and press.

The unions agreed to take part in IndustriALL’s campaign to Stop Precarious Work following the Shell Global Union Network meeting, which took place in the Netherlands on 25 and 26 September. The meeting highlighted the increasing use of precarious workers and contracts, particularly in countries such as Nigeria, Argentina and the Netherlands. In Nigeria, studies have shown that Shell employs more than 50,000 contract workers compared to only 4,500 permanent employees.

In Brazil, the Federation of Rural Employees in the State of São Paulo (FERAESP) demonstrated in São José do Rio Preto, where the Brazilian Congress of Rural Labor Law was taking place. Labor reforms taking place in the country at present, are set to sharply increase the precarity of work.

Italian union, FEMCA CISL, used the occasion of the World Day for Decent Work to call for a stop to precarious work at Shell on social media, where it was distributed and shared widely.

IndustriALL’s energy director, Diana Junquera Curiel, said,” We are pleased so many participants at the Shell Global Union Network meeting are taking action demanding an end to precarious work at the company. We are confident from these actions that we have the basis to form a strong and unified global campaign against Shell in the future.”