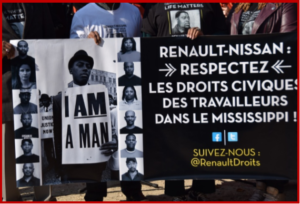 IndustriALL and its US affiliate the United Auto Workers are suing Renault Nissan for what it claims are serious labor right violations at Nissan North America’s manufacturing facilities in Canton, Mississippi. The actions were filed in The Hague, Tokyo and Paris. The suits are under Organization for Economic Co-operation and Development (OECD) Guidelines for Multinational Enterprises against Renault-Nissan BV, Nissan and Renault, with the National Contact Points for the OECD of The Netherlands, Japan and France. The unions requested that these NCPs support their calls to put an end to the systematic and prolonged violations. The cases follow recommendations delivered by the US NCP, including the offer of mediation, which were rejected by Nissan North America more than one year ago.

In a statement by the UAW and IndustriALL it’s said the violations are detailed in a report based on interviews with workers, testimonies and documents from Nissan. “They include aggressive policies and practices of union avoidance, harassment and intimidation, which instill fear at work with the aim of preventing workers from securing union representation. For years, management at Nissan and Renault have repeatedly ignored calls from workers and policy-makers to use their powers to address these global human rights violations.”

The UAW and IndustriALL previously submitted a case against Nissan and Nissan North America with the U.S. NCP. These proceedings ended in January 2015 with the Final Statement of the U.S. NCP confirming that the “issues raised by UAW/IndustriALL merited further examination under the Guidelines,” but noting that Nissan was not willing to accept the NCP’s offer of mediation.

The U.S. NCP also noted in its Final Statement that the NCPs of The Netherlands, Japan and France were consulted throughout the process and would remain available to help the parties. While Nissan is a Japanese corporation, it has cross-ownership with French automaker Renault, with Renault CEO Carlos Ghosn serving as CEO of both companies and of their Alliance, the Renault-Nissan BV incorporated in the Netherlands.

“The Renault-Nissan Alliance has direct influence over the Nissan plant in Canton, Mississippi, and that’s why we’re taking our case to the countries where the control lies,” said IndustriALL General Secretary, Valter Sanches. “Nissan workers around the world are free to join a union but not in Canton, Mississippi. The harassment and intimidation of Nissan workers wanting to unionize must stop. IndustriALL has long backed UAW’s fight to represent workers at Canton, Mississippi, with actions in the U.S., Brazil, Switzerland and France, and we will not back down until the workers get a fair election.”