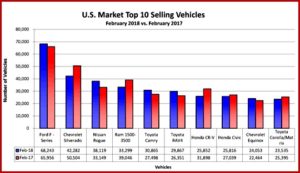 The smoking tire and news wheel spin of the month  – given Trump’s ongoing trade tirades amidst a complete collapse of White House staff support and an ongoing exodus, as well as growing criminal charges – came from the American International Automobile Dealers Association: “Auto sales have been steady for the start of 2018,” claimed AIADA President Cody Lusk as they drifted down. “At around 17 million units a year, that’s a healthy place to be. Our dealer members are focused on what they do best: selling quality products at competitive prices with excellent customer service.”

European brands occupied 9.3% of the market and sold 120,580 vehicles. While their market share was lower than January, overall sales were an improvement compared to the 112,607 vehicles sold last month. With dirty diesel Volkswagen leading, European brands saw an 8.4% improvement compared to February 2017 sales figures when they sold 112,670 vehicles and occupied 8.4% of the market.

Seven of the top ten selling vehicles in February fell into the truck or SUV category, a seemingly endless trend. The Ford F-Series and Chevrolet Silverado pickups remained on top, although sales for the Silverado fell by 16.3% from last February.

Cars were down, for the count, but not out yet. The Toyota Camry saw sales up 12.2% and finished the month in fifth place. The Honda Civic was down 4.5%, an eighth-place finish, while the Toyota Corolla finished in tenth and saw sales slide 7.3%.

NAFTA negotiations continue with a diminishing pulse rate, but North American vehicle manufacturing – tell soon to be staff-less Trump –  with plants located in the U.S., Canada, and Mexico supplied 451,463 vehicles for U.S. dealer pavement. Asian automakers built 421,807 vehicles, including 201,042 cars and 220,764 trucks. European automakers built 29,656 vehicles in North America. These included 10,400 cars and – note – 19,256 trucks, many of them not saleable elsewhere.