US Deficit and Government Spending Grow in Q2 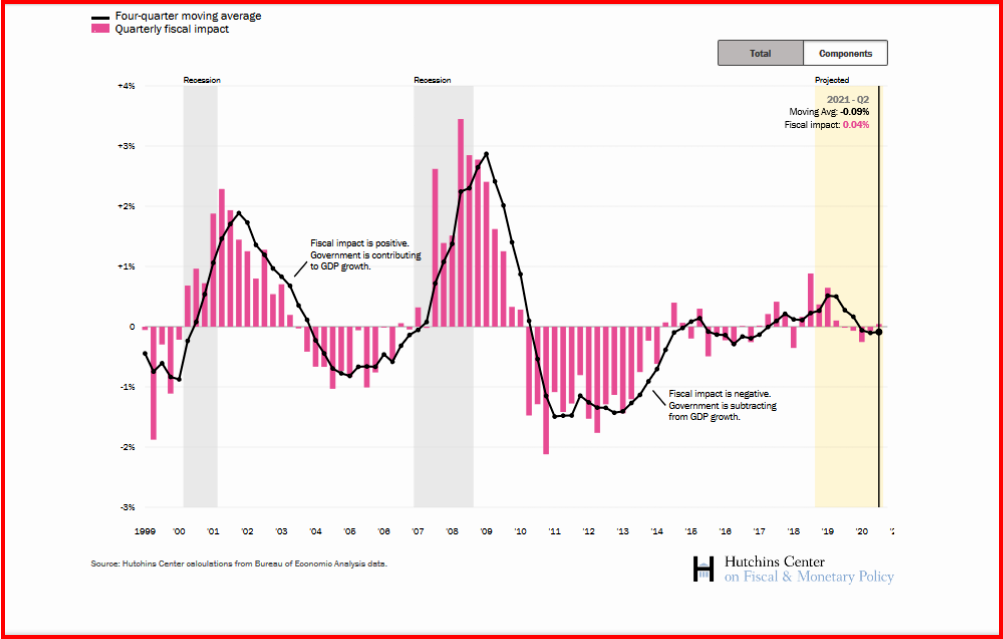 Is this as good as it gets? Ready for another job-destroying recession?

The above Hutchins Center Fiscal Impact Measure (FIM) provides a view of how fiscal policies are expected to affect the economy over the next two years. The latest data show that government spending and tax policies added 0.9 percentage point to growth in inflation-adjusted Gross Domestic Product (GDP) beyond its longer-run potential in the second quarter of 2019. Hutchins expects these policies will continue to support growth through the end of the year.

Federal spending on non-defense programs rose significantly in the quarter and added about 0.5 percentage point to GDP growth, after growing slowly for the past year. Strong spending by state and local governments and federal transfer payments also continue to the pace of GDP growth.

Hutchins’ estimates that under the spending deal reached by congressional leadership and White House officials last week, federal spending will add about 0.25 percentage point to GDP in the fiscal year that begins October 1.In AutoInformed’s view there are trillion dollar deficits coming for years on end. (Trump on Track for Largest Deficits in U.S. History. Trump Record Deficit Watch – Another Proposed Increase)

“We project that federal social benefits and tax policies, which gave an unexpected boost to consumption in the first quarter of 2019, will continue to encourage household spending through the end of the year. Meanwhile, spending at the state and local level is projected to slow and have a smaller effect on growth,” Hutchins said.

However, despite Trump dictates that the US Dollar is too strong (and should therefore be devalued like third world countries do?). And GDP is not growing at the 3% he touts during his race-baiting rallies. It’s ~2%, but don’t look for that claim to disappear as it is re-crafted. Look for Trump dictated interest rate cuts – exactly the opposite of past practices when the Federal Reserve was independent.

“The Trump economy is growing strong and, on the heels of 3.1%growth in the first quarter, is poised to continue expanding,” claimed Secretary of Commerce Wilbur Ross. (see – Fed Poised to Cut Rates for First Time Since Financial Crisis, Ending an Era)

Then there’s the ongoing self-created havoc of Trump’s tariff fiasco, which is costing American consumers and destroying jobs and businesses. (Auto Workers Oppose Trump Tariffs that Would Destroy Jobs)

The Center for Automotive Research (CAR) estimates that the cumulative effect of current and potential U.S. trade actions on automobiles and auto parts could cause new car prices to rise by $2,750 on average. CAR estimates that the price of even U.S.-built vehicles could increase as much as $1,900 due to the current share of imported parts content, and imported vehicle prices could rise by as much as $3,700. Most of the estimated price impacts are attributable to the potential auto and parts tariffs that the Administration is considering.

Fasten your seat belt it’s going to wild ride or is that a tropical storm building in the straits of Hormuz? (Non-Independence Day as EPA Prepares to Scuttle CAFE)

1 Response to US Deficit and Government Spending Grow in Q2