US International Trade Deficit Soars in April to $50 Billion 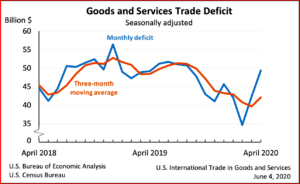 The US  international trade deficit in goods and services increased to $49.4 billion in April from $42.3 billion in March, as exports and imports saw their largest monthly declines in history. It is the latest indicator that economy is struggling during the COVID-19 crisis according to Commerce Department data. The bad news increases if you consider the unemployment crisis.

The unemployment crisis is compounding the economic distress. Under the Coronavirus Aid, Relief, and Economic Security (CARES) Act, that increase in unemployment benefits and is only in place – thus far – through July 31, 2020. The Congressional Budget Office estimates that extending that increase for six months through January 31, 2021, would have the following effects: