US Pedestrian Fatalities Highest Since 1990! 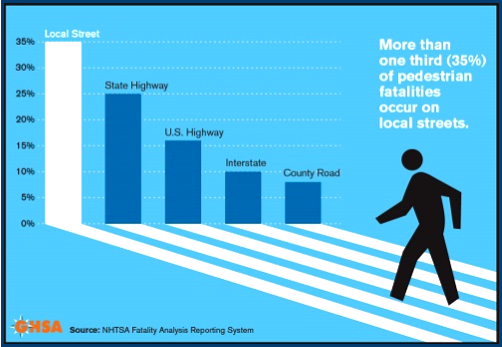 A new report from the Governors Highway Safety Association (GHSA) projects that 6,227 pedestrian fatalities occurred in 2018, the highest number in nearly three decades. States were asked to report pedestrian fatalities for the first six months of 2018. After adjusting this raw data based on historical trends, GHSA projects a 4% increase in the number of pedestrians killed during the full 2018 calendar year. In 2017, 5,977 people on foot lost their lives in motor vehicle crashes.

“While we have made progress reducing fatalities among many other road users in the past decade, pedestrian deaths have risen 35%,” said GHSA Executive Director Jonathan Adkins. “The alarm bells continue to sound on this issue; it’s clear we need to fortify our collective efforts to protect pedestrians and reverse the trend.”

GHSA’s annual “Spotlight on Highway Safety” is a first look at state and national trends in 2018 pedestrian traffic deaths, based on preliminary data provided by State Highway Safety Offices in all 50 states and the District of Columbia. Richard Retting of Sam Schwartz Consulting analyzed the data and authored the report. 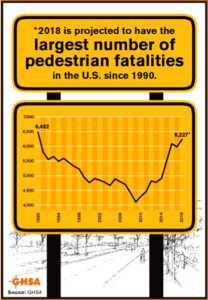 Pedestrians are projected to account for 16% of all traffic deaths in 2018, compared to 12% in 2008. While advancements in motor vehicle safety and technology have increased survivability for vehicle occupants involved in crashes, pedestrians remain just as susceptible to sustaining serious or fatal injuries when struck by a motor vehicle.

There are many causes behind the rise in pedestrian fatalities:

“Crossing the street should not be a death sentence,” said report author Richard Retting. “We have a range of proven infrastructure, engineering, and behavioral strategies that we know can reduce pedestrian deaths. Critical improvements to road and vehicle design are being made but take significant time and resources to implement. It is also important to conduct law enforcement and safety education campaigns now to ensure drivers and pedestrians can safely coexist. It’s crucial to do everything we can to protect pedestrians utilizing a broad approach.”

Despite the alarming projected increase in pedestrian deaths, the report identifies several promising lessons from state-reported data. For example, 23 states saw declines in pedestrian fatalities for the first half of 2018 compared to 2017, with six states reporting double-digit declines and three reporting consecutive years of declines. Additionally, sharp decreases in pedestrian fatalities in some cities suggest that state-level data may obscure local success stories.

The full report, including state-by-state data and infographics, is available at ghsa.org/resources/Pedestrians19.