US Population to Grow More Slowly In Future 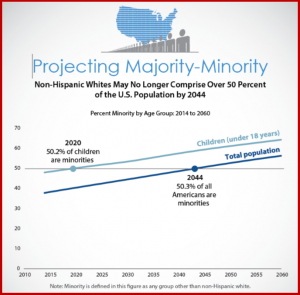 A new U.S. Census Bureau report released today provides an analysis of the nation’s population looking forward to 2060, including size and composition across age, sex, race, Hispanic origin and nativity. Growth rates are key to economic performance and tax revenues, of course, including the output of the auto industry.

Around the time the 2020 Census is conducted, more than half of the nation’s children are expected to be part of a minority race or ethnic group. This proportion is expected to continue to grow so that by 2060, just 36% of all children (people under age 18) will be single-race non-Hispanic white, compared with 52% today.

The U.S. population as a whole is expected to follow a similar trend, becoming majority-minority in 2044. The minority population is projected to rise to 56% of the total in 2060, compared with 38% in 2014.

Another milestone will be achieved by the 2030 Census. All baby boomers will have reached age 65 or older (this will actually occur in 2029). Consequently, in that year, one-in-five Americans would be 65 or older, up from one in seven in 2014.

Ken Zino is an auto industry veteran with global experience in print, broadcast and electronic media. He has auto testing, marketing, public relations and communications expertise garnered while working in Asia, Europe and the U.S.
View all posts by Ken Zino →
This entry was posted in economy, news analysis, people and tagged autoinformed, autoinformed.com, census bureau, Ken Zino. Bookmark the permalink.