US Trade Deficit $39.9 Billion in February 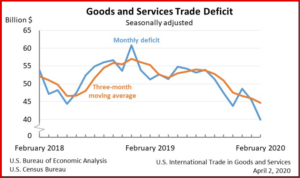 The smaller the trade deficit, the bigger the trouble we are in because of our lack of preparedness for COVID-19. Click to Enlarge.

The nation’s international trade deficit in goods and services decreased to $39.9 billion in February from $45.5 billion in January (revised of course), as imports decreased more than exports as the economy slowed down and consumers cut buying. However, Census doesn’t  have sufficient statistical* evidence to conclude that the actual change is different from zero.

March, given an economy in free-fall, will see a bigger decrease in the deficit, but that’s not good news. Roughly two-thirds of the US economy comes from consumer spending. Yesterday, the Labor Department reported that a record number of 6.6 million people applied for unemployment last week. During the last two weeks more than 10 million people in the US were out of work. That should take your breathe away – sadly, like Corona virus.

(*) The 90% confidence interval includes zero. The Census Bureau does not have sufficient statistical evidence to conclude that the actual change is different from zero.