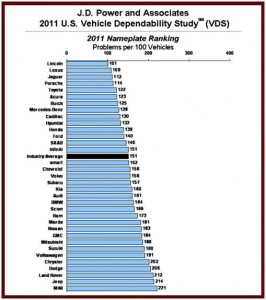 There remains a considerable difference between domestic and import brands, with import brands clearly outperforming the domestic brands in 2011. Click to enlarge.

Overall vehicle dependability has slightly improved from 2010, but automakers are having difficulty overcoming problems with newer technologies and features, according to the J.D. Power and Associates. The study measures problems experienced during the past 12 months by original owners of three-year-old (2008 model year) vehicles.

In the just released 2011 U.S. Vehicle Dependability Study (VDS) overall vehicle dependability averages 151 problems per 100 vehicles, the lowest rate since the inception of the study in 1990. This is better than 70 PP 100 in 2009 but since then the auto industry has averaged 6% gains, which is lower than historical rates that average 8% annually during the 21st century.

In 2011, the slowdown in improvement is largely attributable to increased rates of problems with electronic features in vehicles, including audio, entertainment and navigation systems and new safety features, such as tire pressure monitoring systems.

“Automakers, as a whole, have made significant improvements in reducing traditional problems, particularly with vehicle interiors; engines and transmissions; and steering and braking during the past several years,” said David Sargent, vice president of global vehicle research at J.D. Power and Associates.

“However, as manufacturers add new features and technologies to satisfy customer demand and new legislation, they face the potential for introducing new problems,” Sargent said.

For the first time since the inception of the study, Lincoln leads the overall nameplate rankings in 2011. Lincoln improves by 13 PP100 from 2010. Lexus follows Lincoln in the nameplate rankings. Rounding out the top five nameplates are Jaguar, Porsche and Toyota. The Porsche 911 has the fewest problems in the industry, with just 68 PP100. 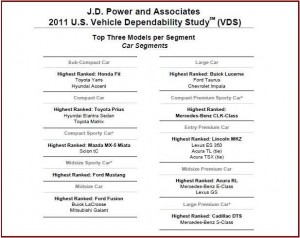 For the first time since the inception of the study, Lincoln leads overall nameplate rankings.

This is consistent with findings of the 2008 Initial Quality Study, which examined the models included in the 2011 VDS after 90 days of ownership. While domestic brand cars have fewer problems (135 PP100, on average) than import brand cars (147 PP100, on average), trucks and crossover vehicles of import brands have considerably fewer problems than those of domestic brands.

In addition to affecting brand image and brand loyalty, long-term dependability also has a notable effect on dealership service and customer service spending. As the number of problems experienced increases, owners are increasingly likely to use non-dealer service facilities for paid service work, according to Power.

In addition, as the number of problems increases, the percentage of owners who say they “definitely will” return to their dealer for service diminishes. Among owners who indicate they have experienced no problems, 76% indicate they “definitely will” return to the dealer for paid service. This proportion decreases to 42% among owners who say they experienced six or more problems.

The 2011 Vehicle Dependability Study is based on responses from more than 43,700 original owners of 2008 model-year vehicles after three years of ownership. The study was conducted between October and December 2010.