Viper Customization – No Copies with Unique ‘1 of 1’ Builds 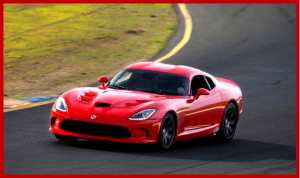 The fifth generation of the Dodge Viper SRT returned to the high-performance sports car market in late 2012 as a 2013 model after a three-year hiatus with a price cut of ~$30,000 given content changes.

Dodge is giving its Viper a level of exclusivity by creating a new custom Viper GTC model and a sales scheme that gives Viper customers the opportunity to create their very own one-of-one American hand-built car. Each one-of-one Viper will feature a personalized instrument panel badge with the customer’s chosen name to commemorate their design. No other Viper will be built with the same paint, stripes or interior.

Another aspect of exclusivity comes from slow sales, as Viper is badly outclassed by the new Corvette, among other performance cars.

There is a personal concierge and the ability to follow along the build process through the Viper Ambassador website at www.driveSRT.com. Viper customers can also take a personal tour of the Conner Avenue Assembly Plant in Detroit where their super car is hand built, as well as choose a variety of delivery options including picking it up in the plant.

The new Dodge Viper GTC model can be custom-tailored with more than 25 million unique build combinations, including 8,000 hand-painted exterior colors, 24,000 hand-painted custom stripes, 10 wheel options, 16 interior trims, 6 aero packages, as well as standalone options. Dodge will send a 1:18 scale Viper replica to buyers to confirm their color choice. (Are you sure you want to do this?)

Customers can configure their one-of-a-kind Vipers at drivesrt.com. The 2015 Dodge Viper has a starting U.S. Manufacturer’s Suggested Retail Price (MSRP) of $84,995, plus $2,000 shipping. The new 2015 Dodge Viper GTC custom model features all the content of the new GT model, and adds the ability to customize a “one-of-one “design, a personalized instrument panel badge, Concierge Service and Viper Ambassador Owner’s Portal with exclusive sharable content to track the build of the car for a starting U.S. MSRP of $94,995.

Dealers will start taking orders of new custom Dodge Viper GTC models in February. Production is scheduled to start at the Conner Avenue Assembly Plant in the second quarter of 2015

The fifth generation of the Dodge Viper SRT returned to the high-performance sports car market in late 2012 as a 2013 model after a three-year hiatus with a price cut of ~$30,000 given content changes.

Powering the 2015 Viper is an all-aluminum 8.4-liter V10 engine that delivers 645 horsepower and 600 lb.-ft. of torque – the most torque of any naturally aspirated sports car engine in the world. Standard are safety equipment that include electronic multistage stability control, traction control and a new four-channel anti-lock brake system (ABS). Since 1992, Dodge and SRT have built approximately 30,000 Vipers at the Mack Avenue Assembly (1992-1994) and Conner Avenue Assembly Plant (1995 – current), both in Detroit.

Ken Zino is an auto industry veteran with global experience in print, broadcast and electronic media. He has auto testing, marketing, public relations and communications expertise garnered while working in Asia, Europe and the U.S.
View all posts by Ken Zino →
This entry was posted in marketing, new vehicle and tagged 2015 Viper, autoinformed, autoinformed.com, Ken Zino, viper customization. Bookmark the permalink.