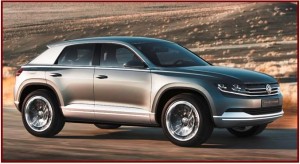 Does this really look like a coupe to you?

At the Tokyo Motor Show Volkswagen is showing a concept SUV – the Cross Coupe, which looks to be headed for production. The four-seat, all-wheel-drive plug-in hybrid  is a slick design that tries to look like a coupe, even though it’s a four-door hatchback.

Cross Coupe is the latest regulation-driven foray into plug-in technology, with the 9.8 kWh lithium ion battery on board costing at least $5,000. Whether buyers will exist for the growing number of plug-in hybrids is a matter of debate by auto industry insiders. By the end of 2016, it’s predicted that 159 hybrid and electric vehicle models will be available for purchase in the U.S. market. This is a significant increase from only 31 hybrid and electric models in 2009. (SeeWhy “Green” Alternative Vehicle Sales Will Remain Limited )

The four-seat Volkswagen SUV is powered by two electric motors – one in the front; one rear – and a direct injection, turbocharged gasoline engine. VW claims that Cross Coupe can drive a distance of up to 45 kilometers on electric power.

At 4,345 mm (~174 inches), the Volkswagen concept is longer than a Golf and shorter than a Tiguan. Under the hood is a 110 kW TSI gasoline engine delivering maximum torque of 210 Nm and an electric motor with an output of 40 kW and 180 Nm of torque. Together or individually these two motors power the front axle. If the Cross Coupe is in all-wheel drive or a pure electric power mode, a rear electric motor joins the energy use party. This second electric motor generates up to 85 kW and develops torque of 270 Nm. The overall output of the system (gas engine + battery) is a maximum of 195 kW.

VW claims with a full tank of gasoline, the Cross Coupe weighs 1,748 kg (58% on the front axle, 42%  rear). It can an additional load of 450 kg and be driven a distance of up to 45 km on purely electric power. In doing so the vehicle produces no emissions, it’s claimed. In the New European Driving Cycle (NEDC), the TSI engine’s fuel consumption is 2.7 liters per 100 km, translating to CO2 emissions of 62 g/km. With a fuel tank capacity of 55 liters, the theoretical range in hybrid mode is 815 kilometers. Adding in the electric range, the Cross Coupe can do 855 km without stopping for fuel.