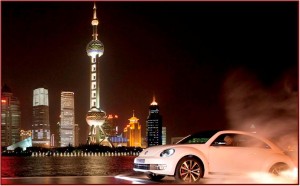 The Beetle is longer, lower and wider, echoing in execution if not advertising themes, the marketing of American cars of the 1950s and 1960s.

When the first Volkswagen Beetle rolled off the production line in Nazi Germany, it was called simply called “the people’s car,” a name it ultimately lived up to in the post war years as the United States rebuilt a democratic Germany under the Marshall plan and protected it from the communist Soviet Union under NATO.

Volkswagen Beetle exports were key to providing jobs and hard currency and were part of the what is called the German economic miracle as more than 21 million Beetles – 22.5 million with the New Beetle, or in slang – bugs, kafer, vocho, coccinelle, fusca or maggiolino – were sold. (So there’s irony in Germany’s current refusal to support NATO’s ongoing war against Libya in any way.)

In 1998 the “New Beetle” returned, successfully riding a wave of nostalgia that was triggering automotive retro designs – including the Ford Thunderbird, BMW Mini, Chrysler PT – creating another generation of Beetle owners, most of whom thought WW2 was a history class. In yet another irony, the new Beetle was a mere sales footnote in Germany, where buyers thought the design too frivolous – no Love Bugs for them. All told about 500,000 New Beetles were sold in the U.S. – 10% of the original Beetle’s U.S. volume, as the competition in small cars had heightened considerably, notably by the Japanese Big Three – Toyota, Nissan and Honda.

Today, what Volkswagen is calling the third generation 2012 Beetle (New Beetle2 or a longer snout appears in the sequel) is celebrating a transcontinental world debut simultaneously in Shanghai, Berlin and New York – if you adjust for time zones.

Volkswagen claims it wanted to develop the new car around the earliest Beetle profile rather than that of the 1998 New Beetle to create “a car that respects the past but looks toward the future.” 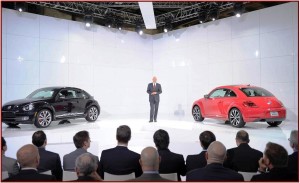 The new focal point is the C-pillar. The development team also increased the car’s track widths and wheelbase. All of this, allegedly, gives the Beetle a “powerful appearance with muscular tension.” I guess “cute” is verboten.

Well, maybe – to be kind when you look at the newly enlarged nose – and definitely not when you get to the rear view that is clearly new Beetle – or is that now new, new Beetle? In any event the Beetle is longer, lower, and wider than the car it replaces, echoing in execution if not in advertising themes, the marketing of American cars of the 1950s and 1960s.

“The Beetle is now characterized by a clean, self-confident and dominant sportiness. The car not only has a lower profile; it is also substantially wider, the front hood is longer, the front windshield is shifted further back and has a much steeper incline. All of this creates a new dynamism,” said Volkswagen Brand Design Chief, Klaus Bischoff. 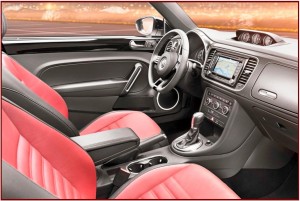 A multifunction display is integrated in the speedometer. The steering wheel has (optional) painted accents in the spokes, depending on the trim level.

The 2012 Beetle is 71.2 inches wide (3.3 inches wider), 58.5 inches tall (0.5 inches lower) and 168.4 inches long (6 inches longer). The new focal point is the C-pillar. The development team also increased the car’s track widths and wheelbase. All of this, allegedly, gives the Beetle a “powerful appearance with muscular tension.” I guess cute is verboten.

The Beetle offers turbocharged direct-injection diesel and turbocharged gasoline engines in the U.S., as well as a 2.5-liter 5-cylinder gasoline engine. In addition there are dual exhaust, performance-handling packages, 19-inch wheels, and sport seats with the two trim packages – Design and Sport. Volkswagen will also offer a panoramic roof, a number of audio options, including a Fender audio system, and a customization program.

Transmission choices include a 5-speed manual or optional 6-speed automatic on 2.5-liter models and a 6-speed dual-clutch automatic transmission is offered on the TDI diesel and 2-liter turbocharged gasoline models. A 6-speed manual is standard.

The 2-liter diesel is the most fuel-efficient Beetle ever according to Volkswagen at an estimated 40 mpg highway, 29 mpg city, and 33 mpg combined manufacturer estimates, not EPA). The diesel is rated at 140 horsepower and 236 lb.-ft of torque

The Beetle 2-liter TSI is the most powerful model offered. With 200 horsepower and 207 lb.-ft of torque, the four-cylinder turbo engine is returns 30 mpg highway fuel economy. Pricing is as yet unknown and will be set when the New, New Beetle appears in the U.S. this fall.

The 2012 Beetle will be covered under a no-charge Carefree Maintenance Program, where all scheduled maintenance is included for the length of the new vehicle warranty – three years or 36,000 miles, whichever occurs first.