Volkswagen Ends Production of Golf For US Market 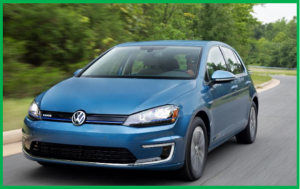 EPA-estimated Miles per Gallon of Gasoline Equivalent (MPGe) for the e-Golf was126 city, 105 highway, and 116 combined; the range a mere 83 miles. Introduced early in 2015, it soon was forgotten as a laughable marketing gimmick.

Volkswagen of America announced on Inauguration Day that the Golf ended production for the U.S. market last week. Volkswagen said that the model year 2021 Golf models built at the Puebla, Mexico plant will sustain sales of the European-designed hatchback through year end. The Golf family name will carry on in model year 2022 with the introduction of the all-new Mk 8 Golf GTI and Golf R, arriving this Fall.

First sold in December 1974 as  the “Rabbit” in the U.S. with a 1.5-liter engine with 70 horsepower, almost 2.5 million Golf family models have been sold in the U.S. market. The current Mk 7 Golf debuted for the 2015 model year – an eternity in terms of technical advances, quality and customer satisfaction practices in the auto industry.

The seventh-generation Golf will be the last of the base models hatches sold here as hatches in the US still carry a cheap econobox image. Pricing for the 2021 Volkswagen Golf with a standard six-speed manual transmission starts at $23,195. The eight-speed automatic transmission starts at $23,995. The destination charge for all Golf models is an additional $995. The premium GTI and Golf R will carry on in 2022.