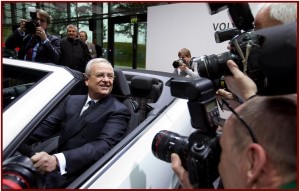 “Positive effects from its attractive model range and strong market position will be curbed by increasingly stiff competition in a challenging market environment.”

The Volkswagen Group outperformed the auto market during 2012, growing in almost all regions. Deliveries climbed 12.2% to 9.3 million vehicles. The Group’s global share of the light vehicle market rose to 12.8% from 12.3% putting it just behind General Motors as the Number Two automaker in the world. Toyota is first with sales of 9.75 million. The Volkswagen passenger car brand delivered 5.7 million vehicles to customers, an increase of 12.7% compared with the previous year. (Read AutoInformed on Toyota Ousts GM from Global Auto Sales Leadership. VW Third)

“Volkswagen is feeling the headwinds –especially in Europe. Nevertheless we remain guardedly confident”, said Prof. Dr. Martin Winterkorn, Chairman of the Board of Management of Volkswagen Aktiengesellschaft, on Thursday during the presentation of the Company’s 2012 financial results on Thursday.

The consolidated operating profit does not include the €3.7 billion (2011 €2.6 billion) share of the operating profit recorded by its communist government dictated Chinese joint ventures. The Chinese JVs are included in the consolidated financial statements using the equity method and are reflected in the Group’s financial result, which rose by €6.3 billion last year to €14 billion.

VW Group said in a statement that its improvement is primarily attributable to noncash effects of €12.3 billion from the final valuation of the put/call rights relating to Porsche as of 31 July 31 2012, and from the re-measurement of the existing shares of Porsche held at the contribution date.

Net liquidity in the Automotive Division was at €10.6 billion at the end of December 2012 (year-end 2011: €17.0 billion). VW said this gives it the necessary financial stability and flexibility to continue its Strategy 2018 that sees it becoming the world’s largest automaker by then. Reasons for the liquidity decline include the acquisition of Porsche’s automotive business, now wholly owned by Volkswagen since last August and the acquisition of Ducati, tooling for the seventh generation Golf, as well as an increased stake in truck maker MAN SE.

Capital expenses as a percentage of sales revenue rose slightly (+0.4%age points) to 5.9%. In addition to its production facilities, Volkswagen invested primarily in the expansion and ecological focus of its model range, and in the modularization of its vehicles and its first electric vehicle. In addition, Volkswagen became the first automaker to commit to the CO2 target of 95g/km by 2020.

Porsche sold 60,000 vehicles and generated an operating profit of €946 million in the five months of its full consolidation in the Volkswagen Group starting on 1 August 1, 2012.

Volkswagen Financial Services generated an operating profit of €1.4 billion (€1.2 billion) in 2012. The division signed 3.8 million new finance, leasing and service/insurance contracts around the world, 21.0% more than in the previous year.

“Volkswagen has everything it needs to continue its successful trajectory of recent years even under different circumstances”, said Winterkorn, adding: “We want to lead the Volkswagen Group to the top of the automotive industry by 2018 – profitably, sustainably and permanently.”

Given the ongoing uncertainty in the economic environment, the goal for operating profit is to match the prior-year level in 2013.