Volkswagen Holds Base Price of New Beetle to $19,765 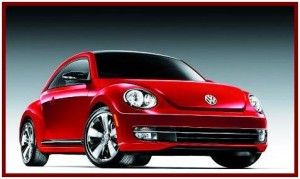 Volkswagen of America today announced that the new Beetle when it appears this fall will be priced starting at $19,765, including the $770 destination charge, which is the same as the outgoing model. It’s an attempt to revive interest in a stretched version of the small car that once accounted for more than 25% of Volkswagen sales in the U.S.  Recently, though, the new Beetle had faded to a footnote in VW’s sales charts accounting for only tiny percentage of the total with year-to-date sales of 1,039.

The new Beetle is longer, lower and wider than the car it replaces, echoing in execution if not in advertising themes, the marketing of American cars of the 1950s and 1960s. Transaction prices of the Beetle will be much higher of course than the $19,765 starting point. The sportiest model the 2.0L TSI will start at more than $24,000 with a 2-liter in-line four-cylinder turbocharged engine that produces 200 horsepower and 207 lb-ft of torque. 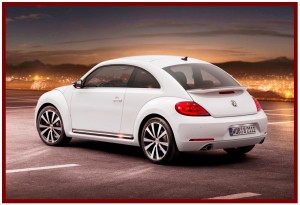 However, a large price reduction of the larger Jetta now on sale and the introduction prices of the new U.S.-built 2012 Passat from $20,765 to $33,720, has given Europe’s largest automaker some momentum in the media as well as the marketplace. In May VW sold 30,100 units, a 28% increase over prior year sales and the company’s best sales month since August 2003 – led by the Jetta at more than 16,000 units.

“The Beetle is now characterized by a clean, self-confident and dominant sportiness. The car not only has a lower profile; it is also substantially wider, the front hood is longer, the front windshield is shifted further back and has a much steeper incline. All of this creates a new dynamism,” said Volkswagen Brand Design Chief, Klaus Bischoff.

The 2012 Beetle is 71.2 inches wide (3.3 inches wider), 58.5 inches tall (0.5 inches lower) and 168.4 inches long (6 inches longer). The new focal point is the C-pillar. The development team also increased the car’s track widths and wheelbase. All of this, allegedly, gives the Beetle a “powerful appearance with muscular tension.” I guess cute is verboten in Wolfsburg.

The Beetle will off turbocharged direct-injection diesel and turbocharged gasoline engines in the U.S., as well as a 2.5-liter 5-cylinder gasoline engine. In addition there performance handling options, 19-inch wheels, and sport seats with two trim packages – Design and Sport. Volkswagen will also offer a panoramic roof, a number of audio options, including a Fender system, and a customization program.

Transmission choices include a 5-speed manual or optional 6-speed automatic on 2.5-liter models and a 6-speed dual-clutch automatic transmission, which is offered on the TDI diesel and 2-liter turbocharged gasoline models. A 6-speed manual is standard.

The 2-liter diesel is the most fuel-efficient Beetle ever, according to Volkswagen at an estimated 40 mpg highway, 29 mpg city, and 33 mpg combined. (VW estimates, not EPA and late availability) The diesel is rated at 140 horsepower and 236 lb.-ft. of torque

The Beetle 2-liter TSI is the most powerful model offered. With 200 horsepower and 207 lb.-ft of torque, the four-cylinder turbo engine is estimated at 30 mpg highway fuel economy.

The 2012 Beetle will be covered under a no-charge “Carefree Maintenance” program, where all scheduled servicing is included for the length of the new vehicle warranty – three years or 36,000 miles, whichever occurs first. (See also Volkswagen Opens New Passat Plant in Tennessee, VW Passat Debuts at NAIAS. Will be Built in Tennessee and Volkswagen Debuts Most Fuel-Efficient VW Beetle Ever)