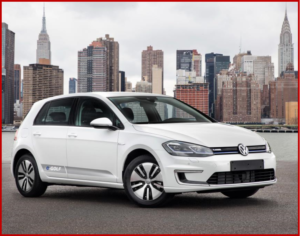 Volkswagen of America said today that the pricing of the 2017 e-Golf. It’s fully-electric e-Golf with a longer EPA-estimated range, better fuel economy and more power than its predecessor starts at a Manufacturers Suggested Retail Price (MSRP) with delivery for the e-Golf SE is $31,315. It’s available at 651 independent U.S. dealers, who were badly hurt during the Dieselgate fraud scandal.

For 2017, Volkswagen is using an updated lithium-ion battery with an increased energy capacity of 35.8 kWh, up from 24.2 kWh. The revised battery increases the range from an EPA-estimated total range of 83 miles to 125 miles on a single charge – under ideal conditions, your mileage can and likely will vary.

There’s a catch however – potentially an expensive one: up to 80% charge within an hour requires charging at a limited number of DC fast charging stations. Frequent and consecutive high-voltage charging – including DC charging – can permanently decrease the capacity of the high-voltage battery. It’s like the old ‘memory effect’ of Ni-Cad batteries.

Improved battery chemistry also helps improve the overall fuel economy of the 2017 e-Golf. For city driving, the EPA estimated fuel economy is 126 MPGe; highway driving is rated at 111 MPGe; and combined city/ highway at 119 MPGe, improved over the 2016 EPA estimates of 126, 105 and 116, respectively.

Based on 13 cents per kilowatt-hour, the EPA has estimated an annual fuel cost of just $550. A federal tax credit of up to $7,500 is available for purchasers; dependent on state, additional credits may be available. Sales of pure EVs are so minuscule that they aren’t even a footnote in the spreadsheets 2017 CYTD e-Golf sales are 2,512. During all of 2016, VW sold 3,937 e-Golf models.

The e-Golf Limited Edition ($33,795 plus destination of $820) adds DC Fast Charging capability, V-Tex leatherette seating surfaces, and Park Distance Control (ParkPilot), with a new feature called Maneuver Braking (arriving late in the model year), which can help driver avoid or mitigate the effects of a collision with stationary objects while parking.