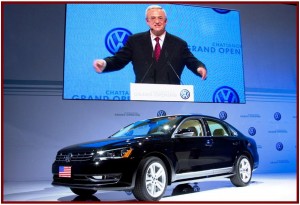 China, the world’s largest car market is also the largest for Volkswagen.

Deliveries of Volkswagen brand passenger cars continued to increase year-to-date through May, tallying more than two million vehicles for the first time, the largest German automaker said in Wolfsburg.

Volkswagen wants to be the world’s largest automaker by 2018, which would require it to overtake Toyota and General Motors, the number one and number two global sales leaders respectively in 2010.

It is almost certain that a resurgent GM will take first in 2011 because of Toyota’s earthquake induced production cutbacks and self induced safety and quality problems. How long it can hang onto the spot as debt free Toyota restores production and increases marketing incentives to recover is uncertain. In the first quarter of 2011 VW was also ahead of Toyota in global sales by 200,000 units.

“Our positive trend continued in May and we have posted yet another delivery record,” said Christian Klingler, Board Member for Sales and Marketing for the Volkswagen Group and the Volkswagen Passenger Cars brand, in statement.

Nonetheless VW remains a minor player in what remains a major global market. As part of the world dominance plan, Volkswagen Group said it will sell 800,000 VW models annually in the United States by 2018 – 1,000,000 with Bentley and Audi included. In the U.S., all VW Group brands delivered 360,300 units during 2010, corresponding to growth of 20.9% – a long way short of the goal.