Volkswagen Starts Production of the New Beetle in Mexico 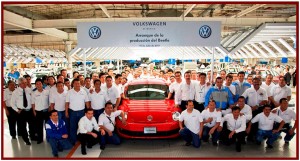 The German-built Beetle was particularly successful in the United States. The original and updates sold almost five million units between 1949 and 1981.

Volkswagen today officially began production of the new Beetle in Puebla, Mexico. The Puebla plant is the largest automobile factory in Mexico and one of the Volkswagen Group’s biggest vehicle manufacturing plants. It supplies North and South America as well as Europe with the new Jetta model.

The VW Beetle and one Golf variant are also built exclusively by Volkswagen de México for world markets. In 2010, the factory produced some 435,000 vehicles. Puebla also manufactures engines for the American continent and with its workforce of over 15,000 is one of Mexican industry’s largest employers.

Puebla is part of a larger North American strategy confirmed several years ago when VW revealed an “ambitious” plan of selling 800,000 Volkswagens annually by 2018 as it abandoned Michigan and moved its North American headquarters to Herndon, Virginia.

At that time it also announced a $1 billion North American factory in Chattanooga, Tennessee, that is now building the new Passat – the first currency hedging U.S. plant since VW abandoned the Rabbit factory in Pennsylvania in 1988 after a four year run of declining sales.

“The new Beetle and the engine plant we are building in Silao represent the great confidence we place in Mexico as a manufacturing location. As one of the main manufacturers of compact class vehicles, Volkswagen de México is a key building block in our growth strategy for North America,” said Hubert Waltl, Board Member for Production and Logistics for Volkswagen Passenger Cars.

The German built Beetle was particularly successful in the United States, of course. The original and updates sold almost five million units between 1949 and 1981. The New Beetle continued the success, with a total of 1.15 million units built in Puebla selling between 1997 and 2010. The latest Beetle celebrated its world premiere in April this year and will be in dealers’ showrooms in Germany from this fall.