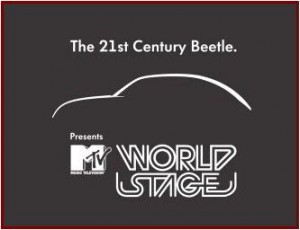 The Beetle is now considered too frivolous by German car buyers to be a strong seller.

Volkswagen will debut the latest iteration of the Beetle in China at the Shanghai Motor Show on 18 April followed almost immediately by an unveiling in Berlin, then New York City just before the New York Auto Show. The Volkswagen Beetle – a car that was a crucial part of the post World War 2 German economic miracle – will debut first in another country experiencing explosive growth.

Volkswagen will be hyping the new Beetle as a world premiere in Shanghai with MTV’s VJ’s hosting an exclusive MTV Sound System production.

The latest Beetle rollout is a sign of the global automarket times, as well as an ironic nod to the fact that the new Beetle, soon to be in its second generation, is considered too frivolous by Germans to count among best selling cars in Germany. That spot is held by the Golf. The Beetle’s appeal is stronger outside of Germany.

Appearing in New York City will be The Black Eyed Peas performing hits from their latest album “The Beginning,” as well as some of their past material at Terminal 5.  In Berlin the MTV World Stage Party, will be headlined by Belgian duo 2manydjs performing a DJ set. Volkswagen claims the New York show will be the most widely distributed World Stage event to date.

The World Stage show from New York City will be streamed live – excluding the UK – and highlights of both the Berlin and NYC events will be available on www.worldstage.mtv.com.

MTV bills itself as the world’s premier youth entertainment brand. With a global reach of more than a half-billion households, MTV attracts the millennial generation, music fans and artists.