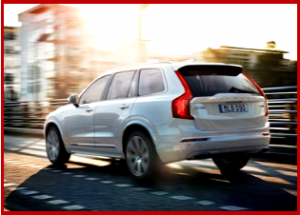 The XC90 is the first car in the world with technology that features automatic braking if the Volvo driver starts to turn in front of an oncoming car that is going quicker than expected.

Volvo Cars choose Berkeley County, South Carolina for its first U.S. factory, claiming it is investing up to $500 million in a plant with capacity to produce up to 100,000 cars per year. Chinese-owned Volvo did not disclose the incentives and costs that South Carolina taxpayers will incur, but Volvo is receiving at least $204 million in incentives from the state and electric utility Santee Cooper.

The factory, located outside of Charleston, will make latest generation Volvo models for sale in the United States and for export. Construction will begin in early autumn 2015, with the first vehicles expected to roll off the assembly line in 2018.

Volvo began importing cars to the U.S. in 1955. Ford Motor, after a stormy relationship with the Swedish automaker, sold loss-making Volvo in 2010 to Geely.

“We’re excited to build our first U.S. factory in South Carolina and we look forward to helping grow the local community and economy,” said Lex Kerssemakers, President and CEO of Volvo Cars of North America, “We were impressed with the friendliness, work ethic and passion of the people in the Charleston area.”

The decision to choose Berkeley County was taken, said Volvo, because of its easy access to international ports and infrastructure, a well-trained labor force, attractive investment environment and experience in the high tech manufacturing sector.

Volvo Cars estimates that the factory will employ up to 2,000 people over the next decade and up to 4,000 people in the longer term. An economic impact analysis compiled by Dr. Frank Hefner at the College of Charleston estimates that, for an initial 2,000 direct jobs, more than 8,000 total jobs would be created as a result. The plant would contribute approximately $4.8 billion in total economic output on an annual basis.

“This is a landmark moment and truly a great day in South Carolina as we welcome Volvo Cars’ first American manufacturing plant to our state,” said Nikki Haley, Governor of South Carolina, “Volvo’s presence and commitment to the community will be felt for decades to come. We are proud to have this global leader in car manufacturing join and strengthen South Carolina’s automotive industry.”

Ken Zino is an auto industry veteran with global experience in print, broadcast and electronic media. He has auto testing, marketing, public relations and communications expertise garnered while working in Asia, Europe and the U.S.
View all posts by Ken Zino →
This entry was posted in manufacturing and tagged autoinformed, autoinformed.com, Ken Zino. Bookmark the permalink.