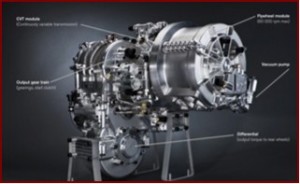 Flywheel energy recovery systems have been around for decades. Their most notable automotive use to date is in Audi’s Le Mans winning race car. Just bring money, lots of money.

An experimental 4-cylinder Volvo equipped with flywheel energy recovery has the potential to increase fuel economy by as much as 25% when compared to a six-cylinder engine with the same performance level.

The latest ‘downsizing the engine is good claim’ came after testing of a kinetic flywheel recovery system on public roads during 2012. As much as 80 horsepower is available for acceleration to the driver for brief periods from the spinning flywheel.

During braking, the energy dissipated is used in part to causes a flywheel to spin at up to 60,000 rpm. When the car starts accelerating again, the flywheel’s rotation is transferred in the Volvo prototype to the rear wheels via a specially designed transmission.

The experimental system, known as Flywheel KERS for Kinetic Energy Recovery System – is fitted to the rear axle. The combustion engine that drives the front wheels is turned off when braking begins. The energy in the flywheel is then used to accelerate the vehicle or to power the vehicle once it reaches cruising speed.

The flywheel that Volvo used is made of carbon fiber. It weighs about six kilograms and has a diameter of 20 centimeters. The carbon fiber wheel spins in a vacuum to minimize frictional losses.

This in theory is not unlike the energy transfer that hybrid electric vehicles use when the covert braking to electricity, but the Chinese Geely owned Volvo claims its system is less expensive and a more efficient solution. These claims await production proof AutoInformed notes.

“The flywheel’s stored energy is sufficient to power the car for short periods. This has a major impact on fuel consumption. Our calculations indicate that it will be possible to turn off the combustion engine about half the time when driving according to the official New European Driving Cycle,” said Derek Crabb, Vice President Powertrain Engineering at Volvo Car Group.

Since the duration of energy storage is limited to the length of time the flywheel spins , the technology is at its most effective during driving with repeated stops and starts. The fuel savings will be greatest when driving in urban traffic, the same as with electric hybrid technology.

Ken Zino is an auto industry veteran with global experience in print, broadcast and electronic media. He has auto testing, marketing, public relations and communications expertise garnered while working in Asia, Europe and the U.S.
View all posts by Kenneth Zino →
This entry was posted in alternative fuels, auto news and tagged autoinformed, autoinformed.com, flywheel energy recovery, hybrids, Ken Zino. Bookmark the permalink.