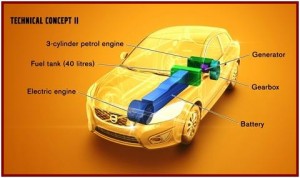 Volvo Car Corporation is now developing what it calls the next step in the company’s electrification strategy. Volvo is showing concepts that extend electric vehicle range by fitting the cars with an internal combustion engine. Thus an EV becomes a hybrid as automakers continue to try to overcome range anxiety produced by short trip electric vehicles and reduce CO2 emissions.

All three of the Volvo hybrid concepts (back to the future?) use three-cylinder gasoline engines to complement electric drive at the front wheels in either parallel or series configurations.  All the variants feature brake energy regeneration, of course. The engines can run on both petrol and ethanol (E85). These new Volvo electric vehicle extended range  projects are supported by the taxpayers through the Swedish Energy Agency and the EU. They explore potential technology combinations – all of them expensive – to solve the age-old electric vehicle range problem. Tests of the various concepts – and let’s face it they are simply hybrids under another name – will get under way in the first quarter of 2012.

If engineers keep this up, they could arrive at a lightweight, front-drive gasoline (or diesel powered) car that would be much less expensive by eliminating the electric motor, power controls, recharging gear, battery cooling, battery back and sundry other EV components. However, it wouldn’t qualify for taxpayer subsidies or meet increasingly stringent government standards for reducing CO2 emissions, which correlate with increased fuel economy. 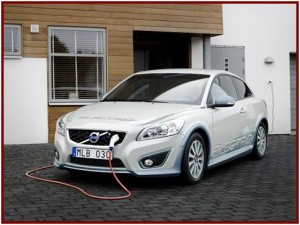 Think of the gasoline engine as the world's longest extension cord - ala Chevy Volt.

“Battery cost and size mean that all-electric cars still have a relatively limited operating range. With the Range Extender, the electric car has its effective range increased by a thousand kilometers – yet with carbon dioxide emissions below or way below 50 g/km,” says Derek Crabb, Vice President Powertrain Engineering at the Volvo Car Corporation.

Two of the concepts are based on the Volvo C30 Electric. In both cases, the standard lithium ion battery pack has been reduced in size to make room for the internal combustion engine under the trunk compartment floor.

In one case, a gasoline engine is connected to a 40 kW generator. The power it generates is used primarily to drive the car’s 111 horsepower (82 kW) electric motor, but the driver can also let the generator charge the battery, thus increasing the car’s operating range on electricity. (The battery pack alone is only good for roughly 70 miles, about where the production Nissan Leaf EV is at today.)

In another – even more expensive – C30 Electric variant, a bigger three-cylinder gasoline engine is mounted in parallel. The turbocharged 190 horsepower engine primarily drives the rear wheels via a six-speed automatic transmission. The 40kW generator the battery can also be charged to give the car increased range on electricity alone. The two power sources give the car more than 300 horsepower in total, and acceleration from 0-100 km/h of less than six seconds. (Think a faster Chevrolet Volt with a different type of transmission.)

The third concept has the entire driveline installed under the front hood. The 111 horsepower (80 kW) electric motor is supplemented with a three-cylinder petrol turbo engine producing 190 hp (140 kW), a two-stage automatic transmission and a 40 kW generator. Power from the combustion engine drives the front wheels via the gearbox and recharges the battery pack whenever needed.

Up to 50 km/h, the car is always powered solely by electricity and has a 50 km range. The combustion engine is activated at higher speeds. It charges the battery pack when its charge drops below a predetermined level. The Volvo concept car also has a 45 liter tank for petrol or E85.