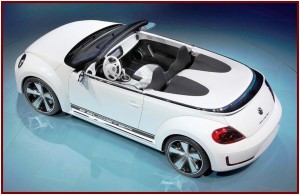 Sometime in 2013 Volkswagen will start production of electric vehicles.

After its world debut in Detroit at NAIAS, Volkswagen is showing the E-Bugster at Auto China in Beijing. This electric two-seater is a whimsical and thoroughly impractical Beetle speedster, with 85 kW in power and a claimed 0-to-100 km/h in 10.8 seconds.

The energy for powering the electric motor is stored in a lithium-ion battery pack whose modules are housed behind the front seats. The battery’s energy capacity of 28.3 kWh in theory under ideal conditions provides a range of at least 110 miles (180 km) in the urban world, VW claims. At current prices of $800-$1,000 per kWh, the battery pack alone costs the price of a new Beetle.

Volkswagen claims the battery can be ‘refueled’ in 35 minutes at specialized and expensive DC charging stations. At home, the battery of the E-Bugster can also be charged from the 120-volt outlets or from 230-volt outlets in Europe overnight, as long as it is a long night. The connector for the charge cable is located below the normal ‘fuel door’ position near the C-pillar.

Sometime in 2013, Volkswagen will start production of electric vehicles, although what platforms it uses is still under internal debate. The Golf appears likely and/or the smaller, subcompact Polo.E-Bugster is looking very much like a production car, but it practicality is limited – the same issue that killed sales of the New Beetle in Germany – therefore its future is unknown.

A report issued last year, “The US and China: The Race to Disruptive Transport Technologies,” claims that China’s state-backed focus on electric vehicles (EVs), its domestic supplies of lithium and current battery production capacity will give it a competitive advantage over the U.S. in EVs.

The free market approach in the United States will cause a more gradual development of new technologies, according to Accenture, which produced the study. Such a conclusion refutes the oft-repeated mantra that a free-market is always beneficial, and that government directed markets or a targeted industrial policy is bad.

It’s a simple longstanding problem: U.S. federal funding – since it has a large element of pork and is spread across many special interests – is actually a disadvantage due to our “pay to play” politics. The U.S. government has committed billions upon billions of borrowed taxpayer dollars to work on energy independence, but the subsidies are divided among many technologies, almost by Congressional district, when compared to the $15 billion the Chinese Government has committed to EV deployment for the next 10 years.