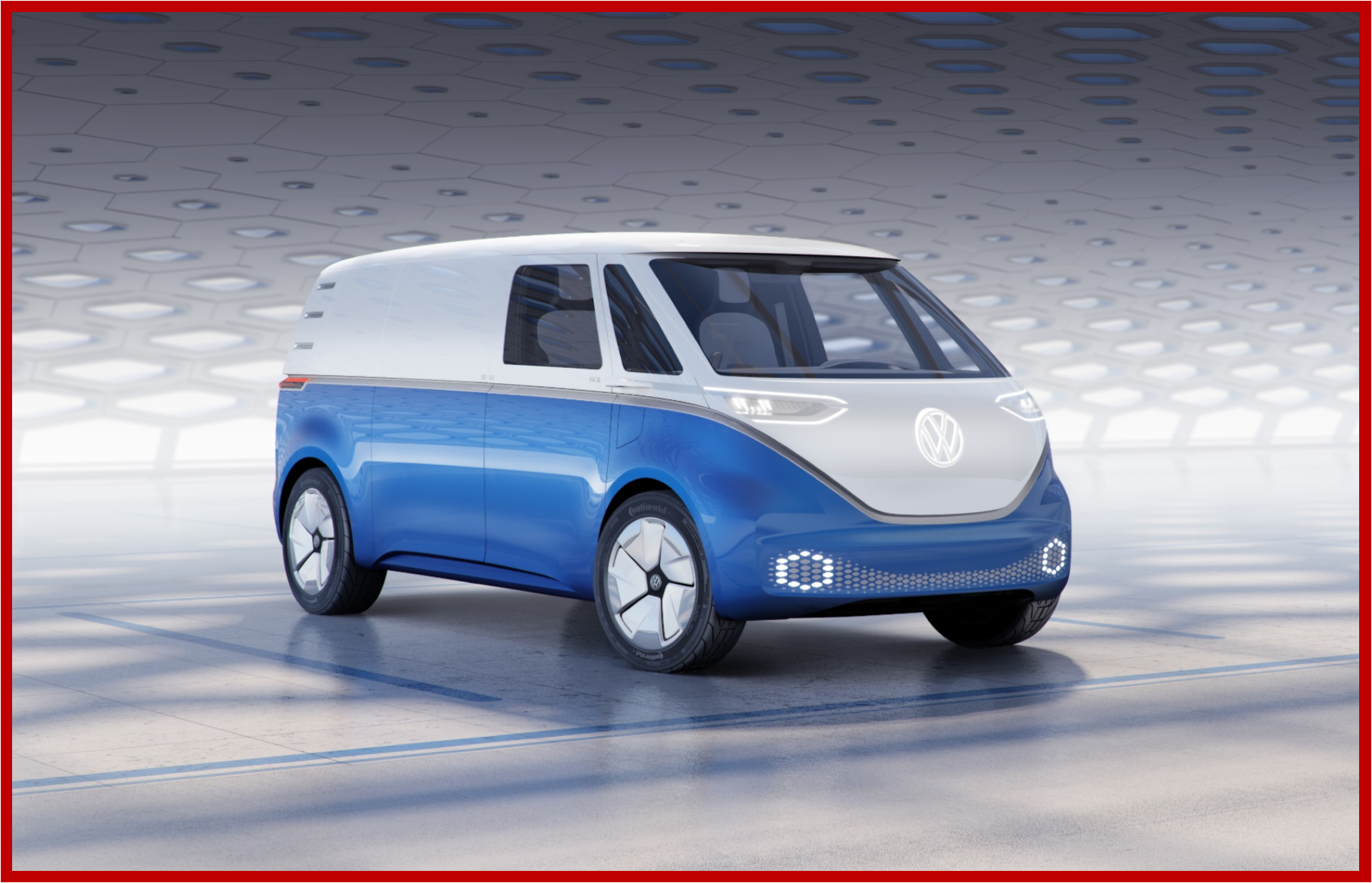 In some parts of the world it’s the most familiar of all transporters – the VW Bulli. Now, with a new I.D. Buzz, Volkswagen Commercial Vehicles is showing how an electrically-powered and completely redeveloped Bulli might change the range of transporters, as a supplementary model to the best-selling T6. (See AutoInformed on VW Group Electric Shuffle – Emden, Hanover to build EVs)

VW boasts it’s the most innovative zero-emission transporter that could be launched into the market as early as 2021. Meanwhile, the concept vehicle offers a glimpse into the middle of the next decade with its alternative, fully-automated “I.D. Pilot” driving mode (SAE level 4 SAE Autonomous Driving Levels).

The transporter concept was first shown at the IAA Commercial Vehicles in Hannover (20-27 September) and is a sibling of the I.D. Buzz  platform. That concept, which was presented in 2017 in Detroit, will go into production starting in 2022. The new I.D. Buzz was designed to be just as close to production level.

Both models are members of the I.D. Family – a new generation of fully connected electric vehicles delivering the ranges of today’s gasoline vehicles, with an allegedly “progressive design and impressive space.”

Another key selling point of the I.D. Family – VW hopes – is the scalability of its batteries. The models can be delivered with different battery sizes according to the vehicles purpose of use and budget. Like all models in the I.D. family Buzz is based on Modular Electric Drive (MEB). With the MEB it is possible – dependent on battery size and the model concerned – to achieve ranges of about 330 to over 500 km under the new European road testing of emissions, which came about in large part because the VW diesel emissions fraud, aka Dieselgate.

Back in August, VW presented the brand’s first all-electric van with the world premiere of the new e-Crafter. While the e-Crafter launched as a panel van with an overall length of 5,986 mm and a maximum payload of 1.75 tons, the Buzz concept is positioned in size as smaller than Crafter. The maximum load  of the concept vehicle is 800 kg. It’s 5,048 mm long, 1,976 mm wide and 1,963 mm tall with a 3,300 mm wheelbase. The rear overhang was extended by 106 mm, making the Cargo version significantly longer than the van shown in Detroit.

Outside, the concept is differentiated from the people carrying version by a new solar roof, wide-opening rear wing doors and a new rear bumper. With a view towards optimizing cargo space with shelving systems, there is no sliding door on the driver’s side – typical of transporters. The front doors and sliding door open electrically. Unlocking the vehicle from the outside is activated via a sensor that recognizes authorized persons via a digital key, which is sent to the van from a smartphone. Instead of the 22-inch wheels of the Detroit concept vehicle, new 20-inch wheels are used with 235/55 tires.

The solar module on the roof uses a photovoltaic system  the claims to generate so much energy that it can extend the range of the I.D. Buzz by up to 15 km a day (remember Dieselgate here. AutoInformed will wait for independent verification). The longer the concept vehicle stands in the sun, the further it can drive later. In theory.

The interior is for commercial use. Instead of two single seats, the concept is equipped with the driver’s seat and a double bench-seat on the front passenger side – the usual commercial vehicle solution. The middle seat can be folded down. This opens a workplace, at which the driver can use an integrated laptop. In the automated “I.D. Pilot” mode this can even be done on the move. The driver activates the autonomous mode at level 4 of the corresponding VDA classification (German Automotive Industry Association) by simply pushing on the steering wheel for a few seconds. It then retracts into the redesigned instrument panel. Thereafter the driver’s seat can be turned 15 degrees to the right in order to enable the on-board computer to be operated from the ideal ergonomic position.

Information is projected onto the road in 3D via its AR head-up display. This positions the information precisely in the driver’s line-of-sight, allowing the driver to concentrate fully on road traffic. AR stands for augmented reality, a technology that shows electronically-generated images in real space. Other information is displayed on a tablet, with infotainment and climate control functions also operated via this portable tablet.

The main controls for driving are located on the steering wheel. Its inner section is not fitted with spokes and buttons, but rather it has a touchpad with a variety of fields. The conventional steering wheel becomes a multi-functional steering wheel. Rear view mirrors are also a thing of the past with cameras projecting images onto small screens in the cab. Some elements are not changing: as in the T6 Transporter, there are numerous storage options in the dash panel, because the I.D. Buzz  was primarily designed to simplify working in the vehicle.

Volkswagen Commercial Vehicles is bringing the “Internet of Things” on board. In cooperation with the German equipment specialist Sortimo, a new shelving system has been developed for the Cargo area and fitted with sensors and a lighting system. This shelving system is connected via a customer-specific function control unit. The data is transferred by WLAN to tablets in the Cargo space and cockpit. By means of a mobile radio network, the functional control unit can communicate with a company’s job or order management system, theoretically making it possible to track all articles on the shelves. This enables precise online management of the type and quantity of freight and equipment in the zero-emission Bulli. Further data is provided by the already available “ConnectedVan” fleet management system.

A Pick-by-Light function, for example, illuminates the position on the shelf of any tool being searched for so that it can be found faster. Thanks to the Safety Check function any unsecured tools or missing parts are indicated before the start of the journey. A nod to Big Brother – components taken out get automatically registered, working times recorded and invoices issued. A large light (0.8 square meter) integrated in the roof makes access to the items easier.

The entire system shelving system can be adapted individually to the Cargo compartment. Therefore, the cargo version has “only” one sliding door on the passenger side; the space on the opposite wall of the load compartment is needed as a storage area and for shelving systems like the Sortimo.

The battery is integrated into the vehicle floor, lowering the vehicle’s center of gravity and significantly improving handling. The transporter’s axles have been shifted outwards, because no space is required for a combustion engine at the front, and the compact electric motor with its gearbox is mounted on the rear axle. This creates additional space (up to 0.2 cubic meters) in the front of the concept vehicle. The electric motor drives the multi-link rear axle.

An optional electric all-wheel-drive version with improved traction and performance can be implemented – as in the people van. A rear axle steering system from the Detroit concept van was also adapted with the large turn-in angle of the front wheels, this results in an extremely small turning circle of less than 10.0 meters – ideal for cities.

The electric drive of the I.D. Buzz  consists mainly of the electric motor with power electronics and a 1-speed gearbox integrated into the driven rear axle. The lithium-ion battery and auxiliary units are integrated in the front body. The flow of high-voltage energy between the motor and the battery is controlled by the power electronics. Here, the direct current (DC) stored in the battery is converted into alternating current (AC). A DC/DC converter supplies the on-board electronics with 12 volts.

As noted, you can equip the van with different size batteries according to the vehicle’s use. If the transporter covers normal distances in the city on a daily and weekly basis, a lithium-ion battery with an energy capacity of 48 kWh is recommended. If greater range is needed, the energy capacity can be increased up to 111 kWh.

With a 150-kW electric motor,  vehicle’s top speed is electronically limited to 160 km/h. As mentioned above, an all-wheel drive system like the one implemented in its sibling model is just as conceivable.

The battery is generally charged overnight at a vehicle depot. The high-voltage battery is charged by cable connection. Using fast charging systems operating at 150 kW direct current, the 48-kWh battery can be charged to 80% capacity in 15 minutes; for the largest battery expansion stage with an energy capacity of 111 kW it takes 30 minutes.

As an alternative, the high-voltage battery can be charged from any conventional household socket, charging stations with a wide variety of power outputs or wall boxes. Although the Bulli can be charged at 2.3 kW via a normal 230 volt main, Volkswagen Commercial Vehicles offers wall boxes that operate at much higher power levels up to 11 kW. They are especially good for charging batteries to 100% at a company’s vehicle depot overnight when electricity prices are often lower.

The battery system of the future production version has also been prepared for inductive charging, likewise with 11 kW of charging power. The van is positioned – via electronic control – over a “charging plate” during parking. As soon as the control unit of the charging plate in the pavement has set up a communications channel with the vehicle, contactless energy can be transferred through an electromagnetic field generated between two coils – one in the floor of the parking space and one in the vehicle.

Over seven decades and six vehicle generations, Volkswagen Commercial Vehicles has refined and sharpened its van design,never losing sight of the role of the model series. With the debuts of the I.D. Buzz, the upcoming decade will see the advent of another series of all-round vehicles to supplement the T6 Transporter, Caravelle, Multivan and California.