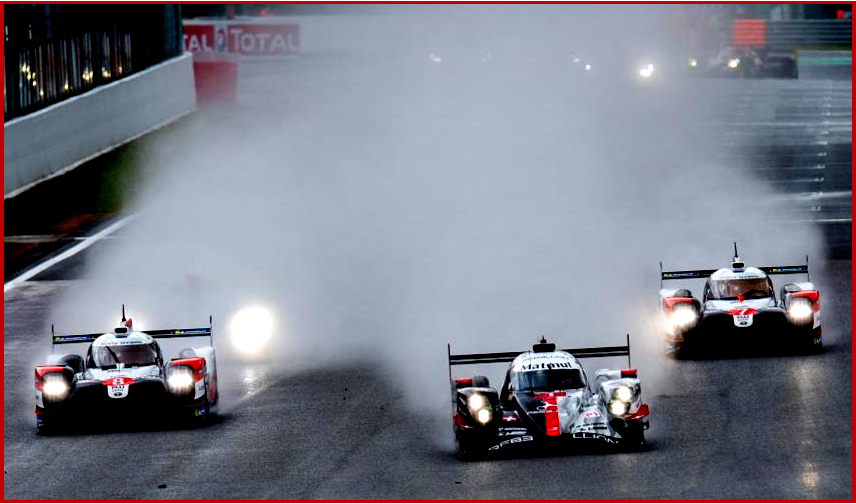 Toyota Gazoo Racing posted a one-two victory in a tense and rain-affected race at  the 6 Hours of Spa-Francorchamps, the sixth round of the season of the 2019-2020 FIA World Endurance Championship (WEC).

After days of sunshine and high temperatures, the frequently variable Spa weather struck just over an hour before the start, with a heavy rainstorm causing the race to begin behind the safety car: two heavy rain showers, and three more Safety Car non-passing periods, made strategy as important as pace. It would have been a vastly different race and outcome if it had remained dry as the rwd Rebellion was clearly faster, until it got wet and had to run against awd Toyotas.

They were pushed by Sébastien Buemi, Kazuki Nakajima and Brendon Hartley, in the #8 TS050 Hybrid, who finished 34.170secs behind as the team earned its fourth one-two of the season, stretching its lead in the teams’ World Championship to 42 points over Rebellion, whose #1 car finished a lap behind in third.

As racing resumed on lap five, both TS050 Hybrids used their four-wheel-drive capabilities, instantly overwhelming the pole position Rebellion #1, with Sébastien in the #8 leading from Mike in the #7.

Conditions were evolving and at the first pit stops, close to the one-hour mark, the #8 crew pitted a lap earlier and kept the Michelin wet tires, whereas Mike in the #7 opted for dry tires. When the safety car was called soon after due to an incident for a GT car, it became clear that conditions favored the dry rubber.

Sébastien relinquished the lead to change tires and the green flags waved with the #7 leading a Toyota Gazoo Racing one-two. More rain was to come, however, as the second hour came to a close and both cars pitted simultaneously for wets; the #7, with Kamui at the wheel, led Brendon in the #8 by a minute, with the #4 Bykolles a further minute behind in third.

When the rain worsened, another safety car was called which eliminated the #7 TS050 Hybrid’s advantage. Fortune smiled when Brendon lost around half a minute leaving the pits due to an issue which had affected both cars intermittently during the race. That restored the #7 car’s advantage.

As the final third approached the sun made an astonishing appearance, allowing José and Kazuki to take their stints on dry tires. The race entered its final hour under the – yawn – safety car, bringing Kazuki on to the tail of José and setting up a duel heading into the final pit stop.

José held the lead under tension and both pit crews serviced the cars in near identical times, with the #7 pitting a lap after its sister car. Mike took the wheel and saw out the remaining 40 minutes, with Sébastien holding station in second until a brief late stop for fuel, crossing the line 34.170secs behind at the flag.

“Today everything went in our favor; without the rain I think it would have been very tough to challenge Rebellion because they were very fast in dry conditions. So, the weather gave us a chance to fight and we really took it; all the strategy calls we made on our car were the right ones,” said José María López (TS050 Hybrid #7).

The WEC season now heads to the biggest race of the year, the Le Mans 24 Hours, when Toyota Gazoo Racing will aim for a third successive victory in the TS050 Hybrid’s final appearance in the epic French event, arguably pre-Covid the greatest race in the world. It will take place on 19-20 September.