Posted on 5 September 2019 by Kenneth Zino 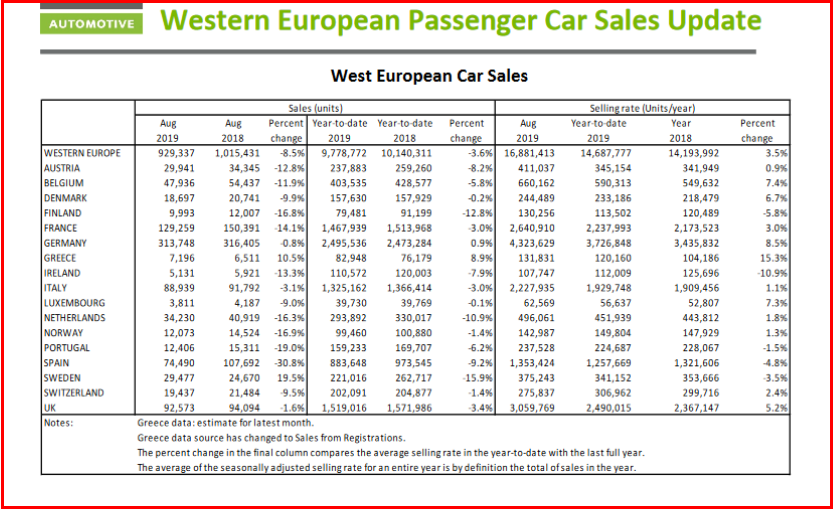 Western European car registrations fell by 8.5% year-on-year (YoY) in August. The YoY contraction was “inevitable” claims consultancy LMC due to the distortion in the market in August 2018 caused by sales being pulled forward ahead of the 1 September 2018 implementation of WLTP emission tests after the German automaker diesel emissions scandal.  (WLTP How Does It Work? Will it Work?) However, the selling rate jumped to 16.9 million units/year in July, from 14.3 million units/year in July.

The introduction of WLTP in September 2018 distorted the market in August last year (the selling rate for that month was 18.4 million units/year), providing a very high base effect which was never likely to be matched this year. In addition, August has historically provided the lowest sales volumes in the year, meaning that relatively small changes in sales can have an exaggerated effect on the selling rate. 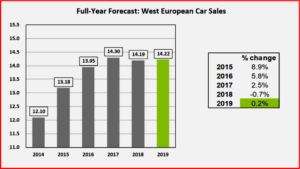 “We suspect that last month’s strong sales may have been the result of an increased use of self-registrations by dealers and OEMs, ahead of further changes to WLTP regulations which came into effect on 1 September, and we may therefore see some payback in selling rates in the coming months,” says LMC.

They advise it would be prudent to treat August’s uptick in  selling rates “with caution, especially given a macroeconomic environment which seems unsupportive of big-ticket purchases at the present time.” Germany’s August figures were strong by any measure though. Registrations were only 0.8% below last year’s WLTP-distorted numbers exceeded expectations, while the selling rate of 4.3 million units/year almost matched last August’s exceptional rate.

The UK’s August volumes are always low in absolute terms, but a fall of only 1.6% YoY was a good result as the selling rate accelerated towards 3.1 million units/year. “However, in the UK and elsewhere, we may simply be seeing another distortion in sales that tells us little about the underlying health of the market,” says LMC.