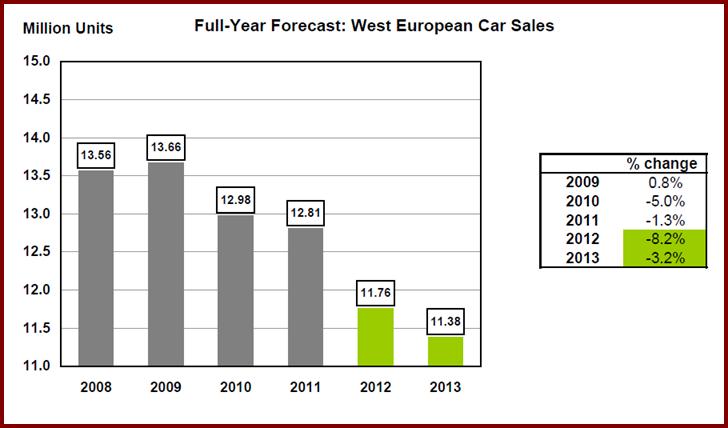 It’s been decades since the market was this bad.

Western European sales fell by 23% Year-over-Year in September, with the selling rate also significantly down, at 11.3 million units/year, compared to the distorted 18.4 million units/year in August , according the respected LMC consultancy.

September saw the downside to August’s pull-forward effect, as WLTP emissions regulations were widely implemented from 1 September. The transition to WLTP also led to the unavailability of some models that had not received approval under the new procedure. The fact that there was one fewer selling day in September 2018 than in September 2017 across the region did not help sales either.

In Germany, Europe’s strongest economy, registrations fell 30.5% Year-over-Year, which sent the selling rate below 2.5 million units/year. However, LMC claims that due to the one-off effects of WLTP, it makes more sense to look at Q3, in which sales grew 1.2% YoY.

When some of the WLTP testing backlogs clear, LMC expect sales to pick up towards the end of the year, leaving the market at around 3.5 million units. In some other markets, the extent of the decline in September was not as severe as it could have been given the exceptionally strong August.

In France, September’s 12.8% YoY fall still resulted in a 7.6% YoY gain when the months of August and September are taken together; a September selling rate of 1.9 million units/year seems respectable in these circumstances. Similarly, the Spanish car market was down 17% YoY in September, but the average selling rate for the year still stands at 1.4 million units/year, and healthy growth for the year still looks to be a safe bet.

Of more concern is the Italian market, which fell 25.4% YoY in September. The level of the slowdown was surprising, given the rather muted pull – forward effect in August ahead of the WLTP deadline, which LMC notes that taxes are not linked to CO2 emissions in Italy. For August and September combined, registrations were down 13.8% YoY, which suggests underlying demand concerns in addition to supply issues with the availability of some models.

September is one of the most important months of the year for the UK market, as new registration plates lead to a surge in sales, which means that the current disruption to supply of some models – along with generally anemic consumer confidence – is ill- timed. Sales fell 20.5% YoY, with the selling rate dropping to 2 million units/year.