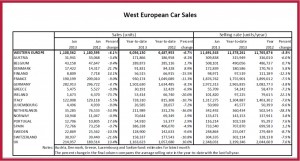 Particularly worrisome was Germany, the largest economy in the EU with sales down by -4.7%, and the year‐to‐date market plummeting by -8.1%.

Automaker sales of light vehicles declined -6.1% in June, as the Eurozone crisis continues unchecked for more than five yars. Four of the five major markets were lower, the exception once again being the UK. The drop was in stark contrast to the recovering U.S. auto market, which is within a year or two to obtaining pre-Great Depression levels and the booming Chinese market,which at 23 million or more units this year will once again be the world’s largest.

Once again the specter stalking European politicians whose austerity policies induced the ongoing human tragedy,  is the their leadership role in the unchecked decline, which much like the decline of European power after a generation was slaughtered during WW1 is looking  to be structural and permanent.

Particularly worrisome was Germany, the largest economy in the EU with sales down by -4.7%, and the year‐to‐date market plummeting by -8.1%. Germany facing elections in September will see its auto industry dip under 3 million units for the full year.

France, Italy and Spain were all lower in June, though the selling rates look a slightly stronger than in previous months. The UK remains a bright spot in the region, as private sales continue to expand rapidly, up by 20% in June.

The selling rate for June was 11.7 million units annually, the strongest result of the year to date, but the full year forecast from LMC Automotive, the source of the latest data, is still negative with a drop of -3% to -4% compared to 2012, albeit half the drop previously forecast.

Of the smaller West Europe counties, the Netherlands looks set for a major fall this year, down 36% for the first six months of the year in the face of a significant economic headwind.

Ken Zino is an auto industry veteran with global experience in print, broadcast and electronic media. He has auto testing, marketing, public relations and communications expertise garnered while working in Asia, Europe and the U.S.
View all posts by Kenneth Zino →
This entry was posted in auto news, economy, sales and tagged autoinformed, autoinformed.com, eu, eurozone crisis, Ken Zino. Bookmark the permalink.