Posted on 4 October 2019 by Kenneth Zino 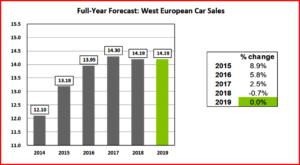 The global economy is fragile and disrupted by uncertainty. Click to Enlarge.

Western European car registrations rose by 13.9% YoY in September, but the selling rate faded to 13.1mn units/year, from16.9 mn units/year in August, the weakest selling rate of the year so far, according to consultancy LMC.

“This has led to a perceived growth in sales across Europe for September while, in many cases, the selling rate has dropped since August and sales growth is weak or negative in the year to date,” says LMC. 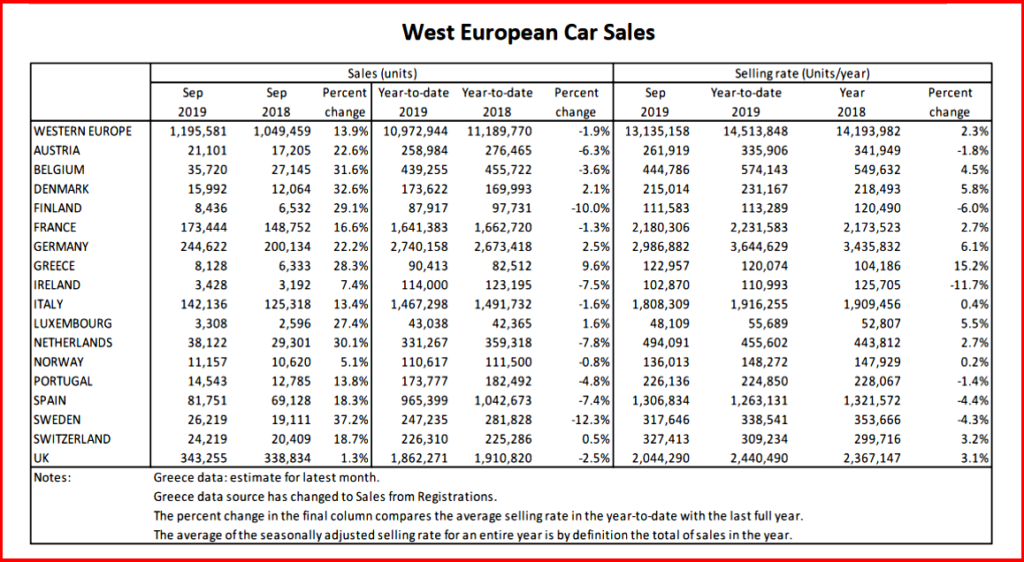 August’s strong sales were largely the result of an increased use of self-registrations by dealers and OEMs, ahead of further changes to WLTP regulations which came into effect on 1st September 2019, and therefore there was some settlement in selling rates in September this year. (WLTP How Does It Work? Will it Work?)

In the epicenter of Dieselgate, Germany’s September selling rate was its weakest for the year so far, at 3.0 mn units/year. However, taken alongside August’s inflated 4.3 mn units/year, the selling rate has averaged almost 3.7 mn units/year over the last two months, still okay. (Death of the Diesel: Daimler Guilty of Selling Dirty Diesels in Germany – Pays $957,000,000 Fine Rather than Litigate)

In the UK, sales advanced just 1.3% YoY in September; a month which usually sees the second highest volumes of the year, due to the release of new registration plates.

“If August and September volumes are taken together, the UK’s performance was similar to last year’s, but this compares poorly to markets such as Germany and France, which saw robust YoY growth.,” said LMC. Political and economic uncertainty around the BREXIT catastrophe is clearly hurting the UK car market AutoInformed opines.

“We expected to see a more significant increase in September, similar to those seen in France, Germany, Italy and Spain, given the negative effect WLTP had on all European markets last year. Instead, consumer confidence is being undermined by political and economic uncertainty. We need to restore stability to the market which means avoiding a ‘no deal’ Brexit and, moreover, agreeing a future relationship with the EU that avoids tariffs and barriers that could increase prices and reduce buyer choice,” said Mike Hawes, SMMT Chief Executive.

In Spain, the market saw an 18.3% YoY increase in sales; however, sales were still down on September 2017’s volumes, which are a better indictor than last September’s artificially low total. The selling rate fell slightly to 1.3 mn units/year in September, and for the YTD, Spanish registrations are down 7.4% YoY.

Ken Zino is an auto industry veteran with global experience in print, broadcast and electronic media. He has auto testing, marketing, public relations and communications expertise garnered while working in Asia, Europe and the U.S.
View all posts by Kenneth Zino →
This entry was posted in economy, sales and tagged auto industry commentary, autoinformed.com, automotive blog, Kenneth Zino, lmc. Bookmark the permalink.