On the eve of US sales reports for November 2020 after a miserable 2020 made worse by ex-president Trump’s denial of the grim reaper reality of Covid-19, the question is where does the industry and where do jobs and the economy go from here? The quest for an answer is compounded by dismal Q3 sales results* that were not influenced by the current “at least one U.S. death a minute” that is now repeating daily with prospects it will get worse indefinitely. (Latest data one death every 40 seconds – editor)

Most automakers while talking positively where they can, actually have enough loopholes in their predictions to easily comply with SEC requirements on so-called forward looking statements. Nonetheless they are tacitly acknowledging that their futures are not in their own hands and subject to unpredictable forces. We will call 15 million units – give or take the output of a few factories – the new normal. This will be devastating for he already ailing economy. 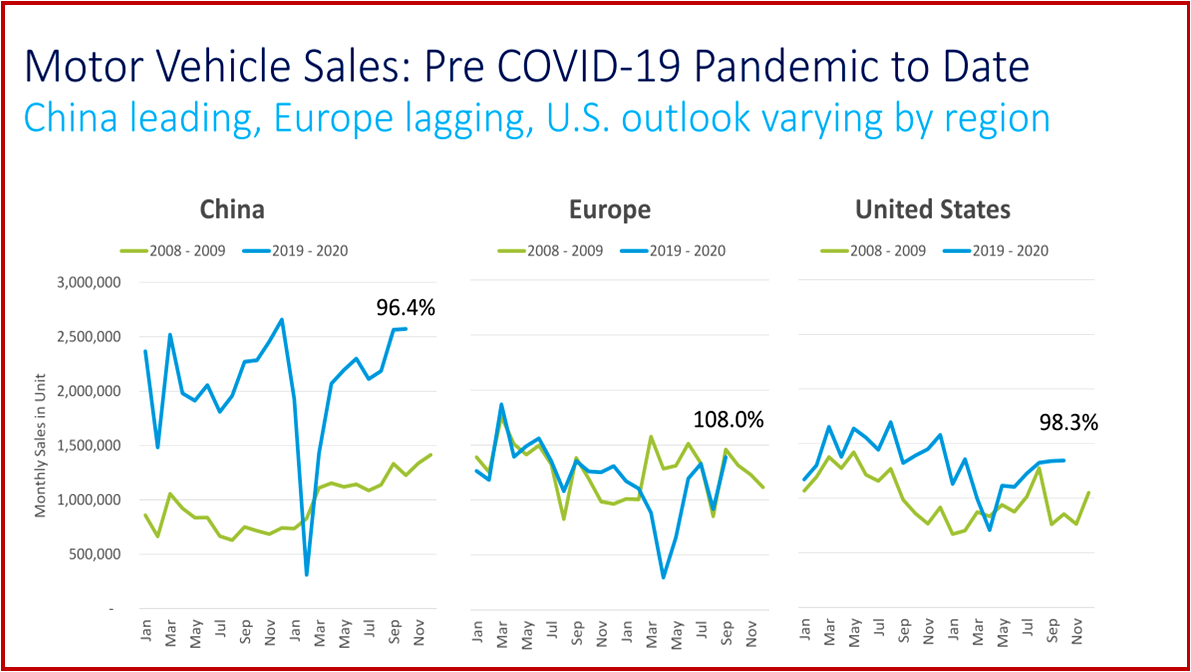 We will call 15 million units – give or take the output of a few factories – the new normal. This will be devastating for the already ailing economy.

The only positive development recently has been the strength of pickup truck and SUV sales, where automakers are taking a breather by dropping incentives and/or increasing prices. But is this just a gasp signifying further breathing problems ahead as unemployment rises, Republicans steadfastly refuse to extend aid for hurting businesses and people and automakers continue having pandemic induced troubles with their global supply lines?

AutoInformed puts it to you thus: This is the market price of failed ideologies grimly held by blind true-believers who ignore real data-backed consequences, scientists, epidemiologists, economists and political scientists to their own detriment – if not indeed their own self destruction.

Our colleagues at LMC consultancy note: “Vehicle transaction prices have reached record highs this year, remaining above $35,000 for six months until October, when they rose to $36,755. Monthly payments, however, picked up by just $16 in the month, versus 2019, thanks to ultra-low interest rates (which are likely to last until 2024) and longer loan terms. Meanwhile, incentives have been cut as low inventories will help with the model-year transition. Whether automakers will keep incentives low in 2021 remains to be seen, but high transaction prices should not be a concern for the market next year.”

AutoInformed thinks that high transaction prices point toward an affordability crisis that will re-emerge in 2021. Overall, 2019  light vehicle sales fell 1.3% to 17.05 million vehicles, continuing a five-year trend of over 17 million units. Sales might, just might top the 14.5-million-unit level in 2020, but 2021 will likely drop some more, perhaps significantly. We will have to see automaker results in January and look at their predictions around the time President Biden becomes our leader for a leading indicator.

LMC partially agrees here. “The pandemic has led to a significant drop in driving rates, while consumers are leasing vehicles to travel fewer miles, sometimes as little as 7,000 miles/year. The implications of this may not be felt in 2021, but within the next two to three years, a flood of lease returns will reach the used-car market, many with attractively low mileages. This could impact sales of new vehicles in 2022 and even more so in 2023. Alternatively, dealerships and OEMs may seize the opportunity to boost sales of certified pre-owned vehicles,” LMC said recently.