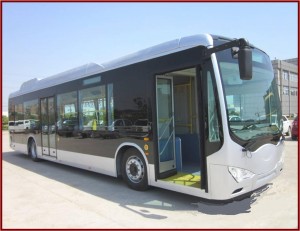 “One of our primary goals was to position Windsor among the first cities in North America to pioneer the efficient use of electric buses.”

The city of Windsor in Ontario has signed an agreement to purchase up to ten Chinese-built BYD 40-foot electric buses for City transit services in 2012. BYD claims a 155 mile range in urban driving conditions. This makes the Windsor, directly across the Detroit River from Detroit, the first city in North America to buy Chinese made EVs. Since Transit Windsor runs in Canada as well as in Detroit, eventually the Chinese buses will be on roads in the United States.

The agreement also opens talks to bring manufacturing of BYD buses to the Ontario region in the near future. BYD has delivered over 300 all-electric buses worldwide and has orders for more than 1,300 in 2012, making it apparently the largest electric bus manufacturer in the world.

BYD said it is in the process of completing FMVSS, CMVSS, and other certification testing in North America this year. BYD has further plans for fleet sales and deliveries after the first Windsor bus deliveries. BYD’s all-electric vehicles in commercial fleets have traveled over 10 million miles during the last two years. In addition to the Fe lithium battery pack, there are large solar panels on the top of the bus to recharge the batteries. Compared to other traditional buses, the Electric Bus has very low or no noise pollution when driving.

“One of our primary goals was to position Windsor among the first cities in North America to pioneer the efficient use of electric buses within its public transit authority and to establish Windsor as a hub for the development, manufacture and commercialization of energy products including electric buses,” said Windsor Mayor Eddie Francis.