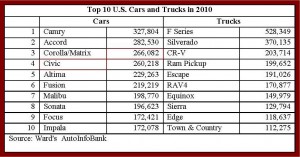 U.S. trucks and Japanese cars are the top U.S. sellers.

The land rush of media conferences and announcements at the North American International Auto Show in Detroit early in January pretty much overwhelmed any in-depth analysis of the winners and losers in 2010’s car and truck sales.

So, herewith, are a few sales morsels to gnaw: Total U.S. car sales came to 5,988,536, surpassing “truck” sales of 5,601,738, with import brands contributing overwhelmingly to the car total. Overall, truck sales rose in concert with the economy, up from 4.7 million in 2009. As you’ll see, the new trucks on the road aren’t all driven by soccer moms like the next two types.

Finally, what is one to make of all these numbers?

First, as everyone knows, Japanese makes rule the passenger car market by a considerable margin, while Korean Hyundai is rising fast.

Second, up until the last couple of decades with the boom in SUVs and CUVs, trucks got little notice in overall vehicle sales analysis reports.

Third, the total sales of cars and trucks (so categorized) in 2010 came to 11.6 million, a boost of more than a million from the year before but a long way from the 16-17-million years the industry enjoyed a few years ago.

Finally, to put these matters in half-century historical perspective, in the first post-war boom year of 1955, Chevrolet registered 1,840,681 cars, all the same size and model except for a handful of Corvettes, while Ford—losing the registration race—tallied 1,547,276, all “full-sized” except for a handful of Thunderbirds.  That fat year for the industry saw total registrations for all car makes of not quite 7.2 million, to which were added a mere 858,000 trucks.